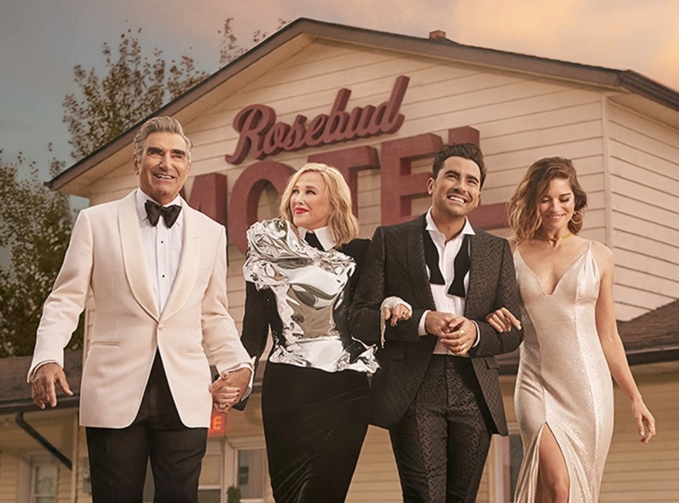 The morning after the “Schitt’s Creek” series finale, Father James Martin and I spent an hour discussing what went down. There was a lot of “Can you believe that happened?” and “That was the best part!” Once we were worn out, we looked at each other through our computer screens and thought, “Well, what do we do now?”

Binge-watch it from the beginning. Again.

“Schitt’s Creek” tells the story of the Rose family, a wealthy and emotionally distant clan who lose everything and is forced to move to a shoddy little town called Schitt’s Creek.

Johnny Rose (Eugene Levy) is a video store mogul who bought the town of Schitt’s Creek (the location of which we never find out) as a joke for his adult son, David. David (Dan Levy, who is Eugene’s real-life son) is a lost soul, used to using the distractions of wealth to get him through life. His sister, Alexis (Annie Murphy), is a parody of the typical rich girl, enamored with attention, expensive clothes and, of course, Instagram. Rounding out the Roses is the stunning Catherine O’Hara as Moira: mother, wife and former soap opera star.

“Schitt’s Creek” tells the story of the Rose family, a wealthy and emotionally distant clan who lose everything and is forced to move to a shoddy little town called Schitt’s Creek.

We follow the Roses as they adjust to their new ordinary lives without fame, fancy parties or flashy decor. They move into a motel, the only place they can afford, and try to find ways back to their old lives. When those attempts fail, they admit they might need support from their new neighbors. They slowly learn that life is unsustainable if you isolate yourself from the people around you, whether they be friends, neighbors or your own family members.

Despite its slow start, “Schitt’s Creek” has turned out to be a huge success. During the 2020 Emmy Awards, it swept every category in the comedy division, from writing and editing to hairstyling and costumes. Each member of the Rose family took home an acting award, bringing the total of Emmys to nine, the most won in a single year by a comedy series in the history of the awards.

The impact of the show goes beyond the acting and writing. There are endless memes, GIFs and Tik Toks of the show circulating the web. Clips of the series are becoming classics, like the “A Little Bit Alexis” musical scene from Season 5. Or, Father Martin’s personal favorite, “Fold in the Cheese.”

More seriously, “Schitt’s Creek” has also been hailed for its portrayal of queer relationships. We journey with David as he has a very awkward fling with the person who becomes his best friend, motel manager Stevie Budd. We are with him as he meets, dates and falls in love with Patrick Brewer. They become one of the most lovable TV couples, on par with Ross and Rachel from “Friends” (but less problematic). David and Patrick show the rest of the world that queer relationships can be happy, hopeful and good, something that hasn’t always been depicted on television.

Here’s what the ‘America’ staff watched in quarantine. You should too.
America Staff

This depiction of a love that is vulnerable, scary and accepting is a theme that is evident in every relationship in “Schitt’s Creek.” The Roses are forced to spend more time together, and it challenges their relationships with one another. David learns to tell his family he loves them. Moira struggles to show Alexis she loves her. In a hilarious moment, Alexis asks her parents what her middle name is and Moira responds “Alexis something Rose.”

“Schitt’s Creek” is the escape we need now. We need to root for people who can change, who can learn to really love each other, free from distractions and the pressures of social climbing.

Every episode of “Schitt’s Creek” comes with guaranteed fits of laughter as the Roses learn what it means to embrace their own brand of “normal” in a strangely normal town. They offer a mirror of what our lives could be if we were willing to risk everything to be truly seen as we are, flaws and all.

Netflix recently released the final season of “Schitt’s Creek” and it is so welcome. It’s the escape we need now. We need to root for people who can change, who can learn to really love each other, free from distractions and the pressures of social climbing. Schitt’s Creek is a town that welcomes all, as long as you want to be there. It offers a freedom to love and be loved as you are.

What more could we possibly need this year?