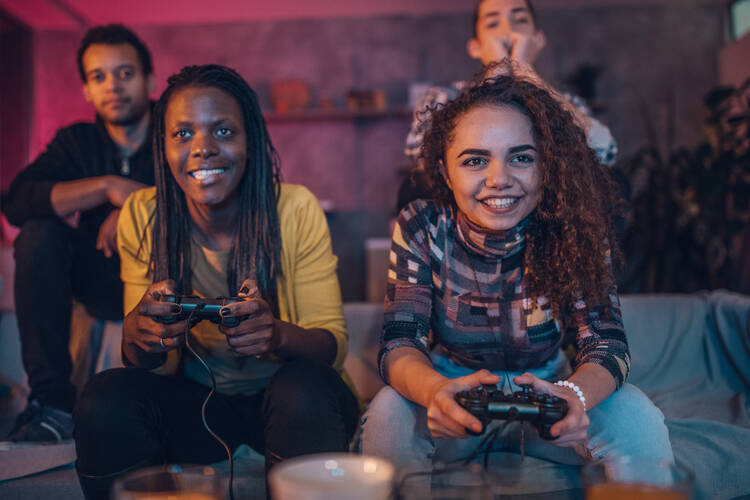 Video games have a reputation for being violent, childish and meaningless distractions. And some of the more popular titles are indeed centered around killing. Some gamers have tried, to humorous effect, to play games like Grand Theft Auto as a pacifist, but cheap thrills remain the largest selling factor in the modern gaming industry. To an outsider looking in, this may seem like all the medium has to offer.

Roger Ebert once said that “video games can never be art.” It is hard to make that case in 2020. Beyond the violent blockbusters, video games offer clever storytelling for adults and children alike. This is not to say that violent video games cannot also be art. I have played violent games that have real depth. But if you are a beginner looking for somewhere to start, if you are skeptical of video games, or if violent games simply make you uncomfortable, the following seven nonviolent, thought-provoking games will serve as satisfying entry points to the medium.

Roger Ebert once said that “video games can never be art.” It is hard to make that case in 2020.

The Talos Principle (2014): A puzzle game in the tradition of philosophical science fiction, the Talos Principle asks questions about existence, the self, artificial intelligence, humanity and God. The player is an android who awakens in a strange garden and is given instructions by a booming voice from the sky to complete a series of trials. Among these puzzles, a sentient computer database tempts you, like the serpent in the garden of Eden, to climb a forbidden tower.

As you solve the game’s puzzles, you sort through bits and pieces about the ancient civilization and the human beings who lived there. Their works of literature provide conflicting advice for your current predicament. Notes from other androids who have gone before you present different philosophical positions in response to various tests. Among the many engaging questions the game prompts, one is central: What constitutes personhood? Is it free will? Human biology? Intelligence? Original sin? Mortality? The game is an excellent exercise for the mind, in both its technical and philosophical puzzles.

The Talos Principle is a sort of science fiction update to the book of Genesis.

The Talos Principle is a sort of science fiction update to the book of Genesis, set among gorgeously rendered, Ozymandian ruins of Roman, Egyptian and medieval civilizations. It is populated with both great works of architecture and their decayed ruins, a fitting surrounding for its ruminations on creation and revelation.

Gone Home(2013): A classic in the somewhat derisively named “walking simulator” genre, Gone Home is a poignant mystery unraveled through no other means than walking through the protagonist’s family home. The game is set in the United States in the 1990s; the player is a student arriving at her family’s new home after she has completed a study abroad program, only to find the house abandoned. The player must piece together clues from letters, cassette tapes and household objects. The game is a unique storytelling experience that offers an intimate glimpse into a family’s past and present.

In the handful of days while I was playing this game, I found myself looking at my own home in a different light. Gone Home is a meditation on the meaning of a home and of the trail of things a person leaves behind. It focuses on transition periods: a family in a new home, a student returning from travel, a marriage in turmoil and a sister finding out who she is while struggling for acceptance. The home itself is sometimes warm and sometimes cold, and even frightening—as any threshold to a new stage in life can be.

Firewatch (2016): Firewatch is a soothing retreat into a virtual national park, as seen through the eyes of a protagonist who is running away from his problems. After abruptly leaving his ill wife to seek refuge as a fire lookout in a national park, Henry tries to push away thoughts about the life he put on pause and immerses himself in a mystery set in the wilderness.

Firewatch is a soothing retreat into a virtual national park.

I consider Firewatch a meta-commentary on video games as an escapist medium. The game itself is an escape into a beautiful wilderness, and video games in general can serve as one such escape from reality. While some critics focus on the negative effects of such escapism, Firewatch offers the position that taking a break can be a healthy period of growth and restoration, as long as you eventually return to deal with your real-world problems. The gorgeous landscapes are as therapeutic for the player as they are for Henry, as long as you don’t get lost for too long. A contemporary update to Thoreau’s Walden, Firewatch shows that solitude in nature can provide a potent space for storytelling.

What Remains of Edith Finch (2017): This game has a similar premise to Gone Home. As a walking simulator set in an abandoned home, it adds to the concept with clever minigames as storytelling techniques. The Finch family is cursed either to die young or to grow old without truly living, and Edith—the last living Finch—returns to her childhood home to finally learn the family stories that had been kept from her.

The family’s central tension comes from the different ways they deal with death. Edith’s mother withholds these stories from her, sealing off the bedrooms of the dead and refusing to acknowledge the family’s losses. Edith’s grandmother, on the other hand, tries to tell these stories to Edith because she does not want her ancestry to be forgotten. With both of Edith’s relatives gone, the game follows her as she wrestles with whether she should write down these possibly cursed stories for her unborn child.

What Remains of Edith Finch is about the inevitability of dealing with grief.

Vignettes of each family member’s death are told through minigames, each designed to express that character’s experience of life and death. One portrays the monotony of her late brother’s factory job, where the player chops off the heads of fish on one side of the screen while daydreaming he is a prince in a fantasy world on the other. These minigames are playful but morbid tragedies, coalescing into a video game about the inevitability of dealing with grief.

Portal (2007) and Portal 2 (2011): Portal’s puzzles are centered around one tool: The player has a special gun that can shoot surfaces to create two ends of a teleportation portal. (Rest assured, this gun is used for physics-defying fun, not killing.) The player uses this gun to complete a series of tests run by a rogue artificial intelligence, GLaDOS, that pokes fun at the player’s intelligence as they try to complete these tasks.

Portal is a funhouse mirror of the human drive for scientific process in the service of profit.

Aperture Labs is a testing facility designed to assess human intelligence. Like “Jurassic Park,” it is a funhouse mirror of the human drive for scientific process in the service of profit—with no moral restraints. While Portal creates this world with a minimal storyline, Portal 2 expands the world and its characters, further developing its satire of private science corporations. Both games offer entertaining puzzles and a great sense of humor, and they have earned their place as classics in their medium.

Outer Wilds (2019): In the tradition of other great works of cosmic science fiction like “Contact” and “Interstellar,” Outer Wilds uses outer space to explore both theoretical physics and metaphysics. In a completely open world that is up to the player to chart, Outer Wilds provides both thrilling and peaceful moments, making the player feel like an astronaut more naturally than any other game I have played. Employing simulated quantum mechanics and space-time paradoxes to produce mind-bending puzzles, visuals and philosophical questions, Outer Wilds pushes the frontier of what a video game engine can accomplish.

I recommend not looking up the plot of the game beforehand, because so much of the joy of the game comes from the act of discovery. Each planet in this dazzling solar system is a feat of the developers’ imagination, with unique treasures and dangers that must be discovered firsthand. Outer Wilds does not hold your hand, but learning its rules never feels like a grind.

If the exploration and puzzles ever feel like too much, you can always take a break. Sit around the campfire on Brittle Hollow, one of the solar system’s planets, and roast marshmallows while your fellow explorer plays guitar, or simply float in space looking out at the swirling celestial bodies until you are ready to adventure again.

These games are just a few of many that defy the stereotype that video games are violent, mind-numbing exercises in wasting time. They are examples of a medium that has developed steadily over time and promises to continue to offer intelligent, emotionally resonant works of art.

Mike Seay was an editorial intern at America Media in summer 2019.