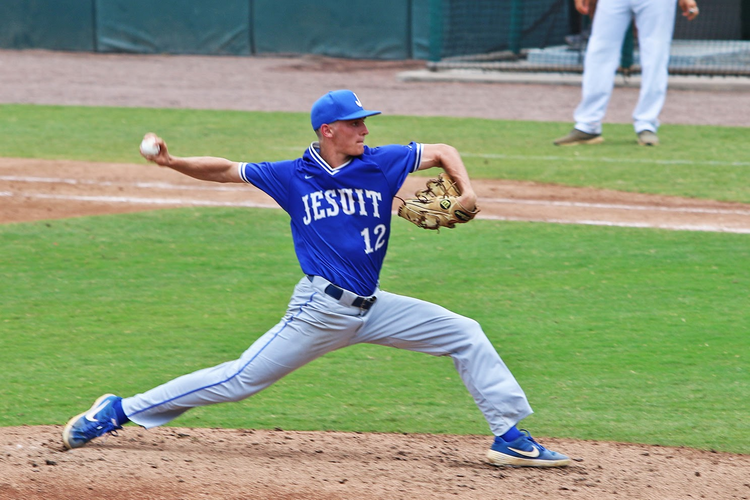 Camden Minacci, a 2020 graduate of Jesuit High School Tampa and baseball star who signed to play at Wake Forest in addition to entering the recent Major League Baseball lottery, converted to Catholicism during an all-school Mass in May 2018 at the end of his sophomore year. His teammate Bennett Lee, a catcher signed to play at Tulane, also converted to Catholicism at a Mass on campus in June 2020.

On May 13, I interviewed Mr. Minacci via Zoom, and the following transcript of our conversation has been edited for style and length.

What made you want to join the Catholic Church at the end of your sophomore year at Jesuit High School in Tampa?

When I came to Jesuit, my family was Methodist, and we went to church every now and then. But once I got to explore my own faith, I found there was something about Catholicism that was so enticing and interesting. I realized my faith wasn’t what I wanted it to be and I could get a fresh start by becoming a Catholic. Over time, a lot of signs had pointed toward it, and I decided in a retreat at the end of freshman year to do the R.C.I.A. process. It was a chance to grow in my faith and take it to a new level.

What was it like becoming a Catholic at a school Mass in front of the whole student body?

It was very exciting. We were allowed to have guests sitting in the front and I invited some of my friends. My sponsor was my freshman theology teacher Mr. [Brian] Greenfield, who helped teach me a lot of what I knew and gave me a great base. It was a really beautiful thing.

I always liked to go to daily Mass, but I feel more comfortable with admitting it now.

Mr. Greenfield, for sure; he was my first theology teacher. His loud and passionate demeanor showed me you could believe in God, but still be tough and strong. Matt Kuizon and Ms. [Rania] Saade helped me go through the process of becoming Catholic. Lastly, Father [Patrick] Hough and Father [Richard] Hermes, the moderator of my sodality and the school president, put me into positions of leadership on retreats and in the Agmen Christi service group as well as the sodality. Those two priests and men made a huge difference.

How has your faith changed or evolved in your first two years as a Catholic?

I’m more ready to defend and explain the faith. I always liked to go to daily Mass, but I feel more comfortable with admitting it now. Friends used to say: “That’s so boring, why are you doing that?” My friends now call me “Father Minacci” as a joke. That used to bother me, but now I’m kind of proud of it. Being able to serve others has been great too. I went on two Kairos retreats, served as a rector on one, and a buddy and I have started a Bible study on Zoom.

I enjoy praying the rosary. My grandmother gave me my first rosary, it had belonged to my great-grandmother, and I still keep it on my desk in my room even though it broke. I also like to do an examination of conscience and spiritual reading. I have here my favorite book,The Imitation of Christ, and I’ve read it five or six times.

How does Catholicism influence your approach to baseball?

It sounds cheesy to say I play for God, or he gives me strength to play, but there’s some truth to it. I make the time to take a knee, make the sign of the cross, and say a prayer whenever I play. To be able to use my platform to spread the faith is a really rewarding experience. Once I pray, I’m ready to go, and it’s become part of my final routine right before I start each game. It helps me feel ready and gives me confidence.

How did your Jesuit education shape you to be the man you have become?

Religiously, it’s created a set of morals and values that I live by. I’ve always understood right and wrong, but being taught it in a theology classroom has really hammered it home. Being beadle of the sodality and learning from my coaches has taught me to be a great leader as well as listener.

The Morality of Baseball: Fay Vincent on the Steroid Scandal
America Podcasts

Listening is certainly a hallmark of Pope Francis in his own leadership of the Catholic Church. If you could say one thing about baseball to Francis, who is a huge soccer fan, what would it be?

There’s a lot more to [baseball] than what people give it credit for. It can be very boring, with long stretches of plays where the only thing happening is people hitting a ball with a stick, but it builds relationships in addition to being a complex game. It’s killing me that I can’t play again with my high school team in lockdown. Even more than the game itself, the down time we had together is something I really enjoy.

With the June Major League Baseball draft being reduced from 40 to five rounds, making it less likely for you to move straight from high school into the majors, how do you see your baseball future unfolding at Wake Forest?

I have my goals in mind. I have checkpoints I’d like to accomplish and I think they’re doable. I see I can play right away as a freshman, as a weekday or Sunday starter. Beyond that, sophomore and junior year, moving up to Friday guy as Wake’s frontline starter, preparing for the 2023 draft. A lot of us have the same trajectory in mind.

@SeanSalaiSJ
Show Comments ()
Join the conversation: Login or create an account
Before you can comment, you need to update your profile to include your first and last name, as required in our comments policy. Then reload this page and you'll be set up for commenting. Update your profile