Ennio Morricone, composer of Spaghetti westerns and ‘The Mission,’ dead at 91 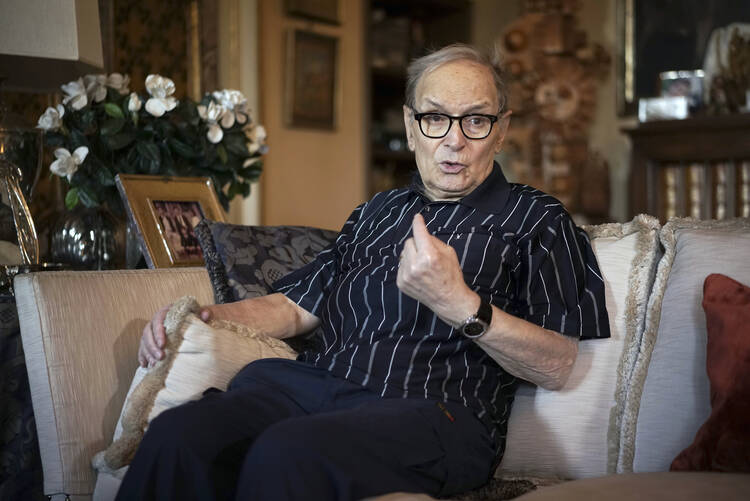 In this May 31, 2016 file photo, three-time best sound-track Oscar winner Ennio Morricone answers questions during an interview with The Associated Press, in Rome. Morricone died Monday, July 6, 2020 in a Rome hospital at the age of 91. (AP Photo/Andrew Medichini, file)

ROME (AP) — Ennio Morricone, the Oscar-winning Italian composer who created the coyote-howl theme for the iconic Spaghetti Western “The Good, the Bad and the Ugly” and often haunting soundtracks for such classic Hollywood gangster movies as “The Untouchables” and the epic “Once Upon A Time In America,” died Monday. He was 91.

Morricone is best known in Jesuit circles for his soundtrack to “The Mission,” Roland Jaffe’s 1986 film about the Jesuit missions in Bolivia. In his history of the film for America, Jim McDermott, S.J., wrote that the music is “frequently featured at Jesuit institutions during Masses of the Holy Spirit, baccalaureate celebrations, ordinations, funerals and on the feast of St. Ignatius. Today, for many Jesuits that simple melody captures the ‘strange blend’ of consolation and longing at the heart of their vocation and sense of humanity.”

In 2014 Morricone premiered his first-ever Mass in the Church of the Gesu, the Jesuits’ main church in Rome. A parishioner at the historic church in the city centre, Morricone composed the Mass to mark the 200th anniversary of the universal reconstitution of the Society of Jesus.

Morricone’s longtime lawyer, Giorgio Assumma, said “the Maestro,” as he was known, died in a Rome hospital of complications following surgery after a recent fall in which he broke a leg bone.

Outside the hospital, Assumma read a farewell message from Morricone.

“I am Ennio Morricone, and I am dead,” began the message. In the greeting, the composer went on to explain that the only reason he was saying goodbye this way and had requested a private funeral was: "I don't want to bother anyone."

During a career that spanned decades and earned him an Oscar for lifetime achievement in 2007, Morricone collaborated with some of Hollywood's and Italy's top directors, including on “The Untouchables” by Brian de Palma, “The Hateful Eight” by Quentin Tarantino, “The Battle of Algiers” by Gillo Pontecorvo and “Nuovo Cinema Paradiso,” a nostalgic ode to the importance of movie houses in Italian small town life, by Giuseppe Tornatore.

The Tarantino film would win him the Oscar for best original score in 2016. In accepting that award, Morricone told the audience at the ceremony: “There is no great music without a great film that inspires it.”

In total, he produced more than 400 original scores for feature films.

Morricone practically reinvented music for Western genre movies through his partnership with Leone. Their partnership included the “Dollars” trilogy starring Clint Eastwood as a quick-shooting, lonesome gunman: “A Fistful of Dollars” in 1964, “For a Few Dollars More” in 1965 and “The Good, the Bad and the Ugly” a year later.

Morricone was celebrated for crafting just a few notes — like those played on a harmonica in Leone’s 1984 movie “Once Upon A Time in America” — that would instantly become a film’s highly memorable motif.

That movie is a saga about Jewish gangsters in New York that explores themes of friendship, lost love and the passing of time, starring Robert De Niro and James Wood. It is considered by some to be Leone’s masterpiece, thanks in part to Morricone’s evocative score, including a lush section played on string instruments.

“Inspiration does not exist,” Morricone said in a 2004 interview with The Associated Press. “What exists is an idea, a minimal idea that the composer develops at the desk, and that small idea becomes something important.”

Morricone was celebrated for crafting just a few notes that would instantly become a film’s highly memorable motif.

In a later interview, with Italian state TV, Morricone cited “study, discipline and curiosity” as the keys to his creative genius. “Writing music, like all creative arts, comes from a long path” along life's experiences, he said.

“A great phenomenon of world music” was how Italian film director Dario Argento described Morricone, who scored five of his films.

In his late 80s, Morricone provided the score for “The Hateful Eight,” Tarantino’s 2015 70-mm epic and the first time in decades that he had composed new music for a Western. It was also the first time Tarantino had used an original score.

In accepting Morricone’s Golden Globe for the music in his place, Tarantino called him his favorite composer.

Italy's head of state, President Sergio Mattarella, in a condolence message to the composer's family, wrote: “Both a refined and popular musician, he left a deep footprint on the musical history of the second half of the 1900s.”

Morricone's sound tracks, Mattarella said, “contributed greatly to spreading and reinforcing the prestige of Italy in the world.”

Morricone’s style was sparse, made of memorable tunes and unusual instruments and arrangements, and often stirred deep emotions.

His music punctuated the long silences typical of the Spaghetti Westerns, with the characters locked in close-ups, staring at each other and waiting for their next moves. The coyote howl, harmonicas and eerie whistling of “The Good, the Bad and the Ugly” became Morricone’s trademark and one of the most easily recognizable soundtracks in cinema.

Minutes before handing Morricone the Oscar for lifetime achievement in 2007, Eastwood recalled hearing for the first time the score of “A Fistful of Dollars” and thinking: “What actor wouldn’t want to ride into town with that kind of music playing behind him?”

Morricone's sound tracks, Mattarella said, “contributed greatly to spreading and reinforcing the prestige of Italy in the world.”

It was a night to remember for Morricone, who had been nominated for Oscars five times (“The Hateful Eight” was his sixth) but until then had never won.

Born in Rome on Nov. 10, 1928, Morricone was the oldest of the five children. His father was a trumpet player.

After studying trumpet and composition at the Conservatory of the Accademia Nazionale di Santa Cecilia in the Italian capital, he started working as a trumpeter and then as an arranger for record companies.

“I started working on very easy kinds of music pieces for the radio, for television and then for the theater, and then little by little I started to compose the film scores,” he told the AP in 2016.

In 1961 he wrote his first score for a movie, a bittersweet comedy set in the final moments of Fascism called “Il Federale” (known in English as “The Fascist”). That decade also saw Morricone cooperate with Pontecorvo, first on “The Battle of Algiers,” the black-and-white classic depicting the Algerian uprising against the French; and later on “Queimada,” a tale of colonialism starring Marlon Brando.

Shortly before his lifetime Oscar, Morricone joked that he would have been happy without the coveted statuette, saying “I would have remained in the company of illustrious non-winners.”

But he also made no secret that he thought “The Mission,” with its memorably sweet theme of “Gabriel’s Oboe,” deserved the Academy Award. That year, he lost to Herbie Hancock’s “Round Midnight.”

Morricone had recently composed music to be performed in Genoa's Carlo Felice Theater later this summer in honor of the 43 victims of that city's 2018 Morandi Bridge collapse, Genoa Mayor Marco Bucci said. The music will be performed on the eve of a ceremony inaugurating the bridge's replacement, the mayor said.

Another renowned maestro, Riccardo Muti, cited his “friendship and admiration″ for Morricone. Muti on Monday recalled that when he directed the composer’s piece “Voci dal Silenzio” (Voices from the Silence” ) the work elicited “true emotion” from the audience, both in Chicago, where Muti directs the symphony orchestra, as well as during a performance in Ravenna, Italy.

Muti called Morricone an “extraordinary” composer both for films and in classical music.

Asked by Italian state TV a few years ago if there was one director he would have liked to have worked with but didn't, Morricone said Stanley Kubrick had asked him to work on “Clockwork Orange.” But that collaboration didn't happen because of a commitment to Leone, Morricone recalled.

Morricone is survived by his wife Maria Travia, whom he cited when accepting his 2016 Oscar. Married in 1956, the couple had four children, Marco, Alessandra, Andrea and Giovanni.

Biographical material for this report was contributed by former AP correspondent Alessandra Rizzo.