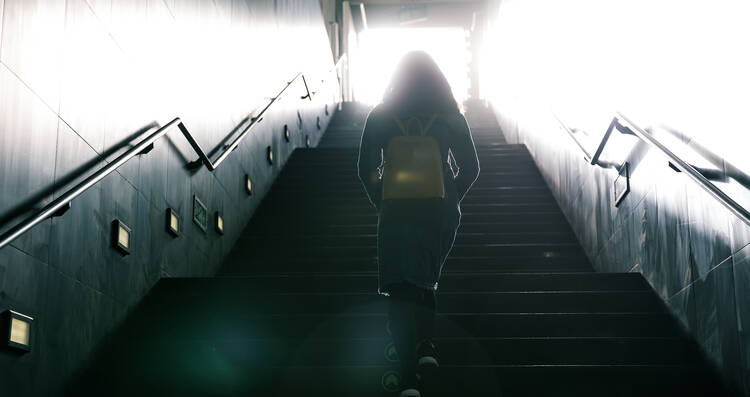 New York’s transit system is no place for a mystical experience. Not sober, anyway.

Yet it was on the M60 airport bus, straddling my suitcase in a crowded aisle, that I read these words from the French poet and social worker Madeleine Delbrêl about finding God on public transit:

In this crowd, heart against heart, crushed between so many bodies… our heart beats like a fist closed upon a bird. The Holy Spirit, the whole Holy Spirit in our tiny heart, a love great as God is beating within us, like a moiling sea struggling to break out, to spread out, to penetrate into all these closed-up creatures, into all these impermeable souls.

I had read this essay years ago in a library in New Orleans, but rereading it while quite literally “crushed between so many bodies” in New York was different. Ever since moving here, I had slowly learned to rein in the gregarious personality that I could previously count on to take me from greeting a stranger on the sidewalk to sipping sweet tea on their front porch in just a few minutes. My newfound restraint had left me feeling just what Delbrêl described: a restless and explosive love trapped within me, longing to break out.

I had read Madeleine Delbrêl years ago in a library in New Orleans, but rereading it while quite literally “crushed between so many bodies” in New York was different.

I devoured Delbrêl’s work in the ensuing days, breaking a rut in which I had found myself unable to read for pleasure—or pray. Her essay “We, the Ordinary People of the Streets” is a Péguy-esque poetic manifesto on being a lay urbanite, reimagining the noise of the city as a chance for inner silence, daily inconveniences as invitations to joyful assent, subway crowds as hundreds of images of Christ hurt and rejected.

As I prayed with Delbrêl’s mystical images of city life, I began to allow myself to imagine—the cynical part of me still bristles at the thought—halos on the people on the train. It felt like a somewhat ridiculous exercise (surely these people are not saints) until one morning when I ascended the subway staircase on 48th Street preceded by a stout businessman in a pinstriped suit and followed by a group of rowdy teenagers. The unfathomably bright sunlight shone all around the man and the shadowy figures in front of him, creating, yes, halos around all of us.

I am acutely aware of how trite this sounds, but taken in the context of Delbrêl’s life and other writings, this subway mysticism—an old New York priest I know once called her an “urban hermit”—cannot be dismissed as sentimental drivel.

As I prayed with Delbrêl’s mystical images of city life, I began to allow myself to imagine—the cynical part of me still bristles at the thought—halos on the people on the train.

Delbrêl’s worldview was decidedly dark as a young woman; she wrote an oft-quoted atheist manifesto at 17 entitled “God is dead… Long live death!” that sketches an image of an entirely absurd and meaningless world. Delbrêl resolved to live life to the fullest by going to parties and dancing in the clubs of 1920s Paris until the wee hours of the morning. But the entropy about which Delbrêl philosophized materialized in her life when, within the same few months, her parents separated and the man she hoped to marry decided to join the Dominicans.

These developments led Delbrêl to question her atheism and, within a few years, convert to Catholicism. Like her American counterpart, Dorothy Day, Delbrêl went on to found a house of hospitality in a working-class neighborhood. Unlike Day, who had many fellow Catholics among her neighbors on the Lower East Side, Delbrêl found herself surrounded by communists, who dominated the French worker movement at the time.

Delbrêl’s message stressed that Christian love was not bound by any religious or political adherence and promoted a theology that re-imagined laypeople as “missionaries without a boat” in their daily lives.

In response, Delbrêl became a bridge builder: She coordinated wartime social programs through both her house of hospitality and the city’s communist government; opened a bakery whose only success may have been reconciling its atheist co-owner with his sister, a Catholic nun; was a friend of the French worker-priest movement and became a sought-after writer and speaker on Catholic-communist relations. Her message stressed that Christian love was not bound by any religious or political adherence and promoted a theology that re-imagined laypeople as “missionaries without a boat” in their daily lives.

Her ideas would catch the notice of ressourcement theologians like Henri de Lubac, S.J., who advocated for a fuller understanding of the missionary role of lay people at the Second Vatican Council. A few years after the council, in 1969, de Lubac would give a speech on division in the church—particularly the U.S. church—at St. Louis University in which he offered Madeleine Delbrêl as a model of the kind of simple living and spirituality that rivals “the refined purity of certain cerebral spiritualities in whose name ordinary Christianity—the only one familiar to the saints and to the ordinary Christians for the past 20 centuries—is criticized.”

Decades later, I find myself reading de Lubac’s words as part of my research for the biography I am now writing on Delbrêl for Liturgical Press’ “People of God” series, and I cannot help but see that the U.S. church, still divided along the lines de Lubac described, needs Delbrêl’s words and example to transform our vision of one another, whether across ecclesial lines or simply across the subway aisle.