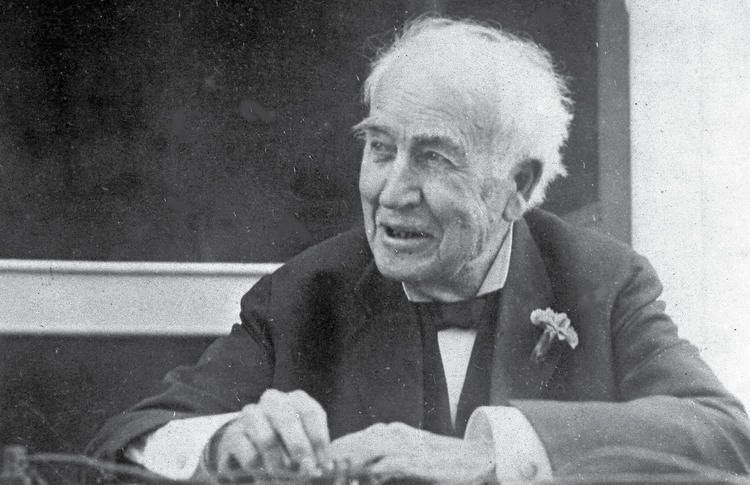 The myth is he was an evil man who electrocuted Topsy the elephant in a filmed experiment and fought a fierce and unscrupulous battle over what kind of electricity the United States would use (alternating or direct current) against the good guy, Nikola Tesla, who wanted to give electricity to people for free. And if you haven’t read Edison, by the recently deceased Edmund Morris, most famous for his Theodore Roosevelt trilogy and as the winner of both the Pulitzer Prize and the National Book Award, you might be tempted to believe this myth. But once you have read Morris’s book, you will know that most of the above is untrue, although Morris does not address whether Tesla wanted to give away electricity.

“Electrocuting an Elephant” was filmed by Edwin S. Porter, Edison’s employee and primary film director. As Morris writes in a footnote, “Electrocuting an Elephant has given rise to an internet myth that Topsy was deliberately killed by Edison in order to demonstrate the lethal danger of alternating current as opposed to his own preferred direct current.” But Edison had nothing to do with the filming of the event (“although it was issued under his trade name”), and Topsy’s death was ordered by officials at Luna Park in Coney Island because she had killed three men in as many months. Not that one of them didn’t invite his fate by giving her a lit cigarette to eat.

Edison succeeded because of his natural genius, talent and perseverance but also because he ate sparingly and slept only four or so hours a night, usually in a rumpled chemical-stained suit.

Edison had hired Nikola Tesla and praised his work ethic before Tesla left to form his own company. In 1915, the two men were rumored to be co-winners of the Nobel Prize in Physics, but neither would ever win it (just as neither Leo Tolstoy nor James Joyce won it for literature). Morris writes of Edison and Tesla: “In all respects except that of creativity, the two inventors were opposites. Tesla at thirty-nine [in 1895] was a melancholy celibate. Edison at forty-nine still had a healthy libido and had carried off two teenage brides, impregnating both of them repeatedly.” And if Edison was egotistical, Morris writes:

[H]is vanity concerned only work, while Tesla’s megalomania had no bounds. The New York Times went too far in reporting that “personally they are warm friends,” but they admired each other despite their professional differences. Edison restrained his contempt for alternating current enough to praise Tesla’s “amazing” success in transporting hydroelectric from Niagara Falls, while Tesla let it be known that he had “the utmost faith in the genius of Mr. Edison.”

The real enemy Edison faced regarding alternating current was George Westinghouse, whose name might be familiar. Edison, however, did allow himself in 1888 to be part of a movement to encourage the use of alternating current in the new electric chair, Morris comments, and did allow many experimental electrical killings of animals in his lab.

If Edison had not been so prone to drop his projects once he had made the big breakthrough, leaving development work to his assistants, we might all now be driving electric cars.

Edison was born in 1847 in Milan, Ohio, in a house built by his father, Samuel, which overlooked the Huron River Valley. You will not learn this until page 615 of the book, though, because Morris tells Edison’s life in a chronologically backward fashion. A framing prologue and epilogue are both set in 1931, when the Old Man, as he was called even in his younger days, died. The story of his life is divided into 10-year sections.

Though the writing is clear and compelling—Morris has a knack for describing even the most complex experiments in such a way that you think for a moment you understand what is going on—the chronology can jar the reader a bit because not only are you working through the life from end to beginning, but you are also going back 10 years in each new section and working forward to where you just left off.

In another sense, though, it makes little difference because Edison’s life was a blur of ceaseless action, reading and experimentation. He is most well known for inventing the light bulb and the phonograph, but Edison patented 1,093 “machines, systems, processes, and phenomena.” In 1881, Morris writes, Edison was “executing, on average, one new patent every four days.” He could do this not only because of his natural genius, talent and perseverance but also because he ate sparingly and slept only four or so hours a night, usually in a rumpled chemical-stained suit. During some periods of intense experimentation, he could go 72 hours without sleep.

Edison was not impressed by the Arc de Triomphe: “I always see beside it another and greater arch, thousands of feet high, made of the phosphate of the bones of victims sacrificed for Napoleon’s personal glory.”

All this work, of course, left little time for his family. He married twice and had three children with each wife. He could be affectionate but was hardly home, and sometimes when he was home his thoughts were still in the lab. He had trouble with his two oldest sons, both unstable in their personal lives—flitting among too many jobs and women and drinking too much along the way—and who both traded on their father’s famous name. They complained he had never given them a chance to work in his labs; he complained he had made his own way and so should his sons. His daughters fared little better. He would send them money when they needed it but refused to write them consoling letters—a waste of time, in his opinion.

He was happiest working in the lab with the men he hired over the years. (Women were hired only for menial work.) One of these men was Francis Upton, who grew frustrated working with Edison on the incandescent light bulb. “Upton was a brilliant young man of mathematical and statistical bent, and because of those qualities, he was slow to comprehend the way Edison’s mind worked,” Morris writes. “To him, four months of failed experiments on one intractable thing meant that the thing was no good. To Edison, failure itself was good. It was the fascinating obverse of success. If studied long enough, like a tintype image tilted this way and that, it would eventually display a positive picture.”

Another way of saying this is that Edison saw his work as a form of play. One of his assistants mentions how Edison played with an object or process until a new idea struck him.

Toward the end of his life, after many years as a loyal Republican, Edison became a progressive and supported Teddy Roosevelt. On return from a tour of Europe in 1911, he “spoke about the belligerent nationalism that he had sensed in every country he visited” and said he was not impressed by the Arc de Triomphe: “I always see beside it another and greater arch, thousands of feet high, made of the phosphate of the bones of victims sacrificed for Napoleon’s personal glory.” In religion, Morris says Edison was a “cheerful agnostic,” ready to believe in a supreme intelligence but unwilling to personalize it.

If Edison had not been so prone to drop his projects once he had made the big breakthrough, leaving development work to his assistants, we might all now be driving electric cars. But Henry Ford, the hedgehog to Edison’s fox, was interested in only one thing, and he triumphed with the internal combustion engine, an invention Edison loathed for its wastefulness. He thought we should “utilize natural forces and thus get all our power.”

This article also appeared in print, under the headline “A Blur of Ceaseless Action,” in the Spring Literary Review 2020, issue.