In the sacristy, I consider striking distance
and the angles of whips.

How close would a Roman soldier need to be
to solicit a gash? How close for a hairline of red?

Would the whip roll across the skin in one clear lick,
or would it hiccup across the folds?

Did the son of the father have folds of skin,
or was he polished tight by hard work
like my father?

I decide on wide slashes—precise but hungry,
as if the soldier had wanted to peel into the heart—

and apply the blood, a mix
of karo syrup and red dye.

Like Jesus in Gethsemane, my father did not want
to be Jesus. He said he wanted to be Peter.

The parish priest knew better: my father has never
not wanted to be the hero.

So every year, he carries a cross through
St. Isidore’s, trailed by the screams
of parishioners: Crucify him! Crucify him!

He wears a crown of thorns he made from
a wild honey locust, and better than ash, it leaves
a bloody mark on his forehead.

We raise his body up on the cross he built
himself from a redwood tree.

My mother makes the same joke about trying
to live with him when he thinks he’s God,

and we practice his lines so much they become
a new kind of family prayer.

I say: Father, if it is your will—
My brothers cry back: Take this cup from me!

and my brothers call:
is to testify to the truth!

My father is known for his wail:
My God! My God! Why have you forsaken me?

But I covet the lines where Jesus sounds lonely
and surprised by it:

Peter, are you asleep?
Could you not watch one hour with me?

As lonely as anyone who has ever tried to be human.

Every year, I find a little more of the broken
alien inside of him—

My kingdom is not of this world.
If it were, my subjects would be fighting

to save me from being handed over.
As it is, my kingdom is not from here.

Every year, the slashes get wider.

This article also appeared in print, under the headline “Passion Play,” in the March 30, 2020, issue. 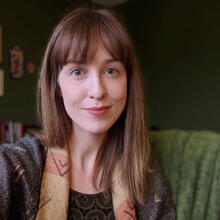