Review: Broadway’s new ‘West Side Story’ is at war with itself 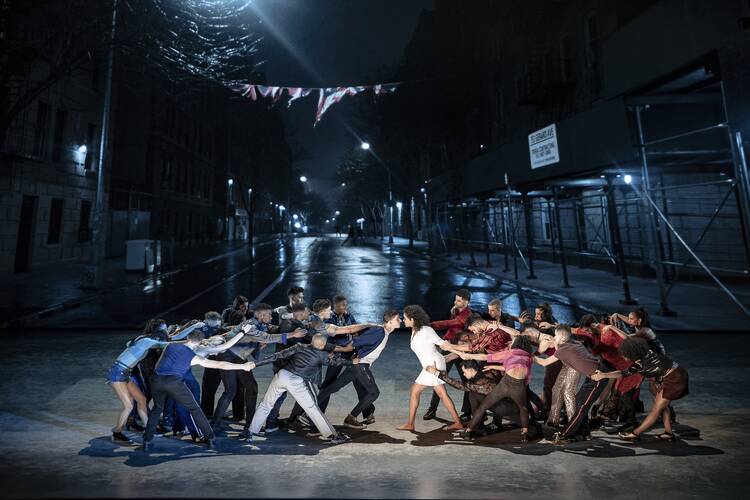 The cast of "West Side Story." (Photo by Jan Versweyveld)

Forget the deadly gang battle between the fictional Jets and Sharks—“West Side Story” is a show at war with itself. This groundbreaking 1957 musical has always been an unstable compound of social realist fable and rapturous dance fantasia, a tale of American violence and dysfunction rendered in operatic flights of song, balletic choreography and patchy melodrama. In a bold new Broadway revival from the Belgian director Ivo van Hove, the show’s divided qualities are heightened and sharpened to sometimes bracing, salutary effect, but also in a way that lays some of the original’s flaws startlingly bare.

As a young cast in contemporary clothes and elaborate tattoos squares off on a stripped-down set dominated by nearly ceaseless video projections, the show’s ostensible grit and tragedy are scarcely more convincing, or emotionally engaging, than if the actors were dressed in hoop skirts and chinos. In a first for Broadway, Jerome Robbins’s signature high-flown dances—typically fused to stagings of the show as tightly as Leonard Bernstein’s score or Arthur Laurents’s book—have been replaced by the more slashing, earthbound work of the Belgian choreographer Anne Teresa de Keersmaeker. Van Hove has also made some sharp cuts so that the show comes in under two hours, with no intermission. But the overall result of this extreme makeover is that while the unique alchemy of song and dance in “West Side Story” is still able to cast something of a spell—the “Tonight Quintet” remains as indestructible as the tardigrade—it comes off more and more like a self-serious period piece with some kicking tunes.

Van Hove’s staging does click beautifully into place in a few key moments. The dance at the gym, where Tony (Isaac Powell) and Maria (Shereen Pimentel) fall in love across gang lines, is not only performed vigorously, it is also one of a few moments where Luke Hall’s video design serves the show exquisitely well, as the opposing sides are superimposed in a disorienting swirl of bodies that belie their supposed divisions. And the simmering “Cool” number employs a savvy call-and-response between dancers downstage and dancers captured on video in one of the show’s built sets, which are mostly obscured from stage view.

The show’s heavily video-mediated staging is a mixed bag.

Elsewhere the show’s heavily video-mediated staging is a mixed bag. I didn’t so much mind the live, multi-camera coverage of scenes taking place in corners of the set we can just barely see from the audience—for one, the filmic intimacy it engenders helps to convey the infectious puppy-love chemistry between Powell and Pimentel, one of this production’s main assets. But the incessant use of pre-filmed video backdrops—of New York City streets, Puerto Rican beaches, police brutality, photogenic cast members strutting and preening, music-video-style—begins to feel like a tic, like the terrible compulsion to check one’s phone screen. And does a shirtless, rain-soaked rumble, which we can see unfold before us onstage quite clearly, really gain from a video-augmented 360-degree view?

On the one hand, these elements could be seen as contemporary upgrades of the show’s once-revolutionary sweep and spectacle, inducements to surrender anew to its unique stage poetry. But not only are many of these innovations as off-putting as they are seductive, I’m not sure there is that much more gold to mine here. It may be unfair to dismiss “West Side Story” based on this admittedly altered version, but I found its 2009 revival, directed by book-writer Laurents, similarly underwhelming. (It will be interesting to see how much the upcoming film by Steven Spielberg benefits from touch-ups by the playwright Tony Kushner.) To put it flatly, it is a piece built out of hoary archetypes, not just from Shakespeare’s “Romeo and Juliet” but from mid-20th-century social-problem dramas, and no amount of ethnically conscious casting—the Sharks here are all Latino, the Jets are a mix of black and white—can make fresh realism bloom where it hasn’t been planted.

It is a piece built out of hoary archetypes, not just from Shakespeare’s “Romeo and Juliet” but from mid-20th-century social-problem dramas.

An imbalance in the central couple showcases another of the show’s liabilities. Powell makes a charming Tony, but he has a thin, reedy voice, while Pimentel’s Maria is both formidably grounded and possessed of a brilliant, searing coloratura soprano. Alas, guess which one sings most of the show’s big songs? It reminded me of the lopsided way “Porgy and Bess” was written, with Porgy getting several songs telling us how he feels and why he does what he does, while Bess mostly gets to sing along, sometimes. It is an issue I only really noticed when the extraordinary Audra McDonald played her in a 2012 Broadway staging that emphasized the show’s musical-theater aspects rather than its operatic ones. We go to a musical for the fully realized acting as much as the singing, but Pimentel, like McDonald before her, does not get to do enough of either.

Indeed it might help if you think of “West Side Story” as a kind of dance opera, putting your focus on its virtuosic score rather than its brittle book or purported social commentary. (Set aside, again, that it lacks what so many canonical operas have: great big roles for women.) Even so, it is a far cry from revivals like last year’s shattering “Oklahoma!,” which both reimagined and rediscovered that show’s integrally interwoven blend of music, drama, romance and comedy. In the history of American musicals, these two classics loom similarly large and had roughly analogous impact on the form. But while nothing can take that significant historical role away from “West Side Story,” this new production, try as it might, does not make a great case for its future.