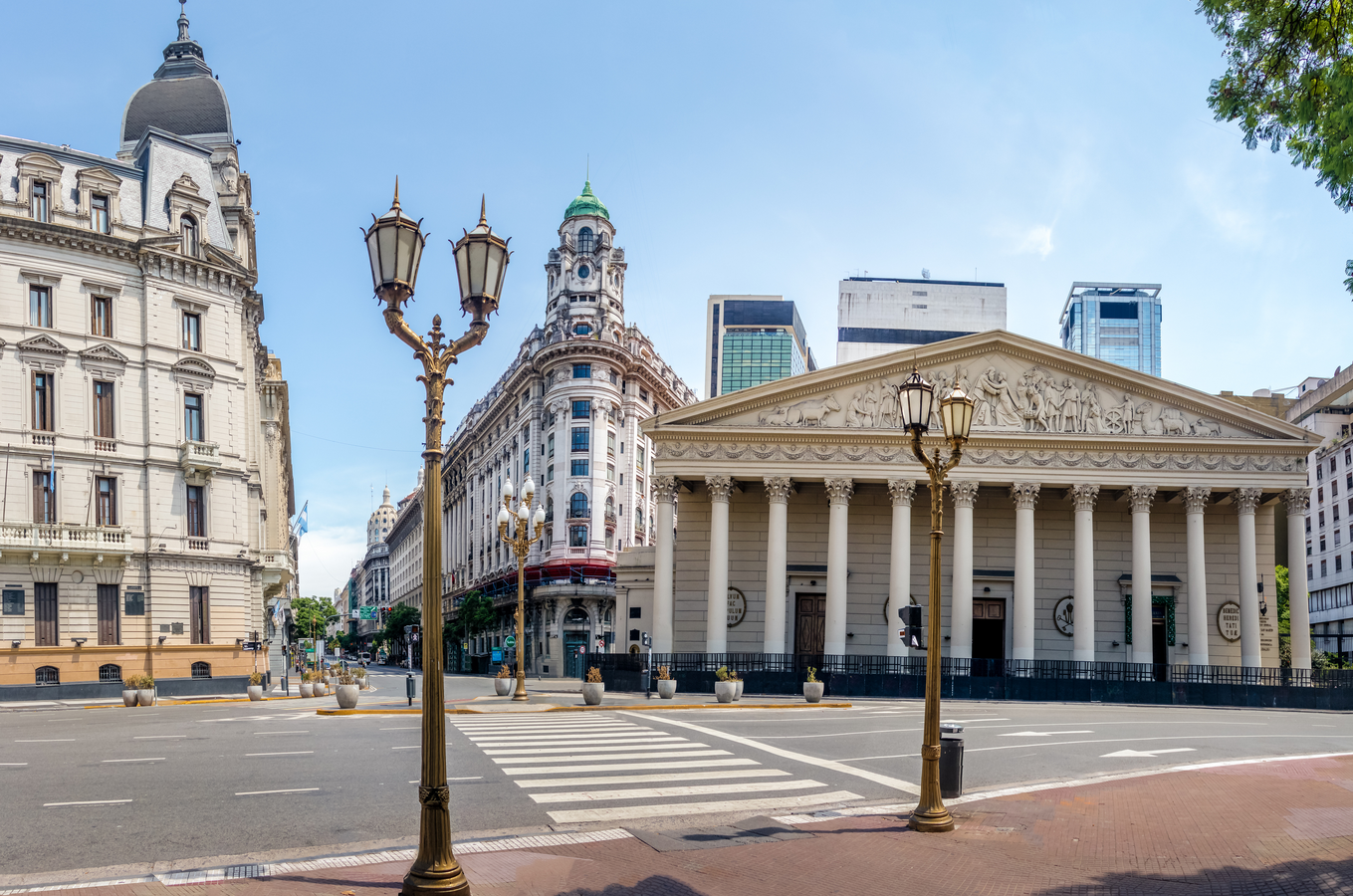 The boulevards of Buenos Aires have a breadth and sweep to rival Haussmann’s Paris; the football stadiums rock; the landscape rolls. While it is a city bursting with life, even the dead provide a tourist destination—at the mausoleum city of the Recoleta Cemetery, people still leave flowers at the crypt of Eva Peron.

But it was the thriving, immediate cultural life of Buenos Aires I was there to sample, as a juror at the Buenos Aires International Festival of Independent Cinema, which by itself is worth a visit to the Argentine capital. Unlike many similar events around the world, real people—not just critics—go to the festival. But as I kept telling my colleagues, as soon as we got a break in jury duty, I was going on “the pope tour.”

As I kept telling my colleagues, as soon as we got a break, I was going on “the pope tour.”

Even in Buenos Aires, this required a bit of explanation—though halfway through the explanation I would get nods of recognition: Jorge Mario Bergoglio, I would say, was the archbishop of your city; his base was the Metropolitan Cathedral; he grew up in the working-class barrio of Flores. Ah, yes, they would say, and in 2013 he became Pope Francis.

Right, and going on a guided following of his footsteps here was not something I wanted to miss.

The opportunity that presented itself began inauspiciously. It was a Friday morning, the cab crawled through rush-hour traffic and it was raining. Oy, as they would say back in New York. But this turned out to be a blessing in disguise: When I arrived at the tour office, I was the only one there other than staff, and when my guide arrived he informed me that the group he would be taking on tour consisted of...me.

There was a brief negotiation with a taxi driver outside, and then Juan (last name Kavarkian “like the doctor,” he smiled, as if he had heard it before) told me to hop in. We had the cab for the entirety of our trip, and it would be part of the package. We tooled off from the office of Tangol San Telmo (in the Monserrat neighborhood) for the drive of 20 minutes or so to the Flores neighborhood.

Not surprisingly, Juan was a student, working part time for the local tour company (I booked online through Viator), a student not just of Buenos Aires history but the pope’s. Before we reached any of the landmarks of Francis’ life, Juan provided a running history—of the area, Buenos Aires and how Francis’ father, Mario Bergoglio, emigrated from the Piedmont region of Italy in the 1920s to what his son would later call the “end of the world.” There was a shortage of labor in Argentina at that time, thanks to increased international business investment from countries like Britain, and the government actively encouraged and promoted immigration from countries like Italy. Mussolini was on the rise, and a Bergoglio relative had emigrated earlier and started a successful paving company some 500 kilometers outside Buenos Aires. This was where Mario Bergoglio would eventually go to work.

Francis’ father, Mario Bergoglio, emigrated from the Piedmont region of Italy in the 1920s to what his son would later call the “end of the world.”

But the Bergoglio family travel plans did not go quite according to schedule, something Juan attributed to a “divine message.” The family members coming with Mario “couldn’t get tickets out on the boat they had intended to take,” he said. “The news arrived 30 days later that the ship was wrecked, killing every person on board.” The Bergoglios took a later boat.

As we traveled the streets of greater Buenos Aires, Juan pointed out the still-visible physical legacy of Piedmontese immigration on his city—the surviving Italianate architecture, the hand-wrought ironwork that remains on the facades of buildings that, then and now, provided homes for people uprooted and striving. Several thoughts occurred to this traveler. One was of the universality of experience—the stock market crash of 1929, which Americans think of as an American event, also ruined the Bergoglio paving company and forced Mario by 1932 back to Buenos Aires, where he would marry Regina Silvio and father five children, the eldest being Jorge Mario. Theirs was a classic immigrant story, in many ways, a story that is part of a history to which the people walking the streets of Flores—or their fellows in New York, Paris or Rome—become, by necessity, numb on a day-to-day basis. But we are always surrounded by history; and as Juan took me to the various neighborhoods and the school and churches that had played an essential part in Pope Francis’ life, that sense of immersion in the muted past became more and more pronounced.

In a few cases, it was also blackly comic. There is a plaque on the building where Jorge Mario Bergoglio grew up, commemorating the pope’s childhood there. But as Juan pointed out, Pope Francis was actually born across the street, where on this particular day a dumpster and rather dilapidated Japanese compact car stood guard; graffiti besmirched the walls of the house. When we toured the schools young Jorge had attended—as well as one he didn’t but where the San Lorenzo soccer team was founded (San Lorenzo being, famously, the pope’s favorite team)—life was proceeding as usual. Children could be heard singing. Pedestrians made their way around the strange pair of men studying the fútbol mural on the side of the school. Lunchtime office workers strolled through the park across the street from San José de Flores church—the one containing the confessional in which Jorge Bergoglio had his epiphany about joining the Jesuits (a moment now memorialized in “The Two Popes”). The sun peeked out.

A highlight of the tour was our visit to the temple, as Juan called it, of St. Charles Borromeo and Mary Help of Christians, a fantastical place of rococo design where not only the pope’s parents were married but the baby Jorge was baptized—in, it should be noted, what looked like one of the more ostentatiously decorated fonts in the history of the sacraments. It seemed appropriate.

The church’s renown as Francis’ former headquarters probably accounts for some of its popularity.

As we made our way back toward the more central part of Buenos Aires, Juan gave a rough outline of Pope Francis’ life—the influence of his grandmother, for whom young Jorge cared during her paralysis and who encouraged his love of reading; his study of literature and his teaching of it, first in “a very humble school in Santa Fe” and later at the Colegio del Salvador in the neighborhood of Almagro, which we visited; how the military junta forced him into semi-exile in Cordoba and how the Jesuit-turned-bishop-turned-archbishop served his city from the base of the Metropolitan Cathedral, the next stop on our tour. We left our cab nearby and arrived on foot.

It is a magnificent neoclassical structure with a large nave and five aisles and, like many of the churches in Buenos Aires, enormous—and enormously crowded. On a Friday at noon (the tour had been about two and a half hours) Mass was overflowing. Was this typical for a weekday midday Mass? Juan said it was. It’s a turismo hotspot; a Babel-esque chorus of sotto voce conversations could be heard in the chapels off the central pews, though most of the attendees were taking part in the Mass.

The church’s renown as Francis’ former headquarters probably accounts for some of its popularity; Francis’ popularity might account for some of the attendance, too. It is the place where I would part from Juan and make my wandering way back to my hotel, thinking about history and where exactly I was.

But a few notes on the cathedral: It is the home of the Pope Francis Museum, for one thing. It is also where one can find an image of the “Christ of Footballers.” In 1979, Héctor Scotta and Daniel Bertoni, two ex-players for Argentina’s renowned national team, donated the image of the “Cristo de Buen Amor”—the Christ of Good Love, which is also called the soccer player’s Jesus. You can find him in the left aisle, next to the crypt. And why is it in such a prominent location? Because the Metropolitan Cathedral was home to the world’s most famous soccer fan.

This article also appeared in print, under the headline “The Buenos Aires Bergoglio Called Home,” in the January 20, 2020, issue.