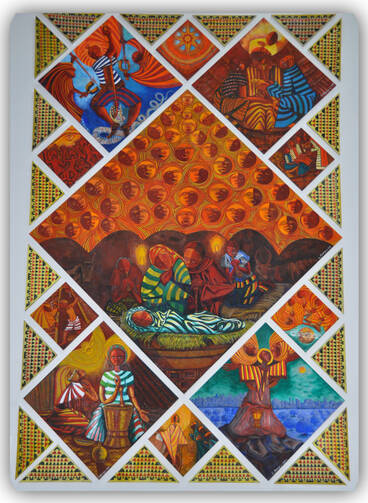 The characters in the Christmas story are belovedly familiar: Mary and Joseph with the Christ child at the story’s center; the shepherds watching over their flock by night and then becoming the first witnesses of God born among us; the wise men from the East with their gifts of gold, frankincense and myrrh; raging Herod killing all the male children of Bethlehem who might be a threat to him. But what of the angel who appeared to the shepherds and first told them the good news? And what of the multitude of the heavenly host who suddenly appeared with the angel? I fear we overlook these vital heralds.

Since 1990 a vibrant black parish has worshiped before the marvelous mural by Engelbert Mveng, S.J.

Not so at Holy Angels Catholic Church on the South Side of Chicago, where since 1990 a vibrant black parish has worshiped before the marvelous “Holy Angels” mural, by Engelbert Mveng, S.J. At its diamond-shaped center is a simple scene of the Holy Family attended by the shepherds and overseen by a sky of angel heads bent in benediction over the child. The figures are dark-skinned, in African garb. Set in smaller diamond forms around the nativity scene are depictions of angelic activity through salvation history. Counterclockwise they begin with Michael the archangel vanquishing the serpent-dragon, Satan. Then there is the angel who delivered Meshach, Shadrach and Abednego from the fire of King Nebuchadnezzar, followed by another act of deliverance as an angel frees Peter from Herod’s imprisonment (Peter’s face closely resembling Nelson Mandela’s).

In the lower left, the Virgin Mary, appearing as a young Nigerian woman in her village hut, is visited by the archangel Gabriel as the Holy Spirit hovers above. The miracle of resurrection and ascension is announced by angels at the lower center of the painting, while reverse chronology then shows angels appearing to comfort Christ during his agony in the garden. Angels from the Book of Revelation next appear as our protectors at the Judgment. Two beloved stories follow: The three traveler-angels bring Abraham and Sarah the good news that they will bear a child, Isaac, and the blind Tobit is healed through the intercession of the archangel Raphael. Again at the top, the star of Bethlehem shines down upon the multitude of angels (actually 49 faces, recalling the call to forgive seven times seven).

What of the multitude of the heavenly host who suddenly appeared with the angel? I fear we overlook these vital heralds.

The mural and its church are together a sort of miracle. Built in 1896, Holy Angels burned to the ground in 1986. Its enterprising pastor, the Rev. George Clements, persuaded the distinguished architectural firm Skidmore, Owings & Merrill to help him rebuild it (free of charge) and commissioned Roy Lichtenstein to design the stained glass windows and Father Mveng to do the central mural. By this time Mveng had been a professor of history at the University of Yaoundé, Cameroon, for over 20 years. Born on May 9, 1930, to Presbyterian parents, he entered the Society of Jesus in 1951 and was ordained a priest in 1963. As a young Jesuit he became acquainted with Bamun drawings and Bamiléke art and became convinced that there were universal principles to be found in traditional African art.

He was prolific, writing significant treatises in theology, history and anthropology and producing such masterworks as the “Ugandan Martyrs” altar at Libermann College in Douala, Cameroon; “Our Lady of Africa” for the Basilica of the Annunciation in Nazareth, Israel; and, perhaps most famously, the “Stations of the Cross” and the “Resurrection” mural for Hekima College in Nairobi, Kenya. The stations are particularly powerful and strikingly embody Mveng’s “theology of life”—his affirmation of life over all threats to it. And the “Resurrection,” which unites a sense of crucifixion and its transcendence, with Mary and John both witnessing the cross and pointing to the risen Christ, is interestingly also known as “the eucharistic fresco” because of the vivid side panels recalling the marriage feast of Cana and the multiplication of the loaves and fishes.

To the horror of many, Mveng was assassinated by an unknown assailant on the night of April 22, 1995, in Yaoundé because of his defense of poor people against political oppression. And yet, with Father Mveng this Christmas, we can scarcely pray over any more consoling or challenging words than those of the heavenly host he painted for Chicago, who praise God and say: “Glory to God in the highest, and on earth peace among all with whom God is pleased.”