Review: The faith that made Mr. Rogers a great evangelist 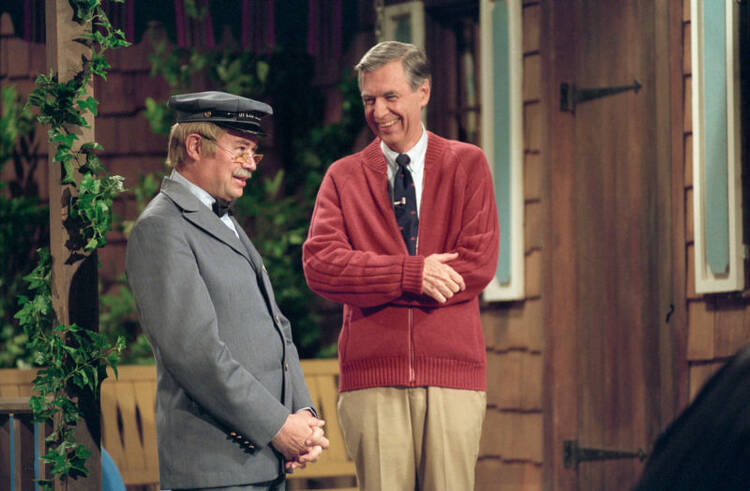 Fred Rogers, right, is pictured with David Newell, as Speedy Delivery's Mr. McFeely, in the documentary "Won't You Be My Neighbor?" (CNS photo/Lynn Johnson, Focus Features)

A number of years ago, while attending the College Theology Society annual convention at St. Vincent College in Latrobe, Pa., I was delighted by two coincidences. First, I discovered we would be sharing the campus that weekend with the Steelers’ Men’s Fantasy Camp, several hundred burly men adorned with various Steelers tattoos and jerseys and more than a few retired N.F.L. legends. Second, the campus hosts the Fred Rogers Center, offering educational training to teachers and featuring a huge archive of materials from “Mister Rogers’ Neighborhood,” the children’s program that Fred Rogers hosted on public television from 1968 to 2001. (He died in 2003.)

Exactly As You Areby Shea Tuttle

I then made some dismaying discoveries. Theologians, it turns out, are more or less ambivalent about football, and most of my peers didn’t care much if Terry Bradshaw or Jerome Bettis were on campus. Second, some of the younger professors and graduate students in attendance told me that they were still in grammar school when “Mister Rogers’ Neighborhood” went off the air.

Exactly As You Are: The Life and Faith of Mister Rogers will prove of interest to theologians and Gen-Xers alike (and perhaps even to other generations). Author Shea Tuttle employs her theological expertise (she holds a master of divinity degree from Candler School of Theology in Atlanta), several years of research and interviews, and her own fond reminiscences of watching Mister Rogers in this well-timed new book. (“A Beautiful Day in the Neighborhood,” a film biopic starring Tom Hanks, was released in November, a month after the book’s release.)

Exactly As You Are: The Life and Faith of Mister Rogers will prove of interest to theologians and Gen-Xers alike (and perhaps even to other generations).

Tuttle remembers the show as a conversation she had regularly with Rogers. Often, “he’d bring something with him—maybe pretzels, wooden blocks, or a musical instrument.” And, of course, he always performed two rituals: trading his blazer for a zippered sweater, and sitting down and methodically exchanging his shoes for the famous navy canvas sneakers.

Review: ‘A Beautiful Day In The Neighborhood’ is (surprisingly) not about Mr. Rogers
John Anderson

But there was another side to Rogers as well. Asked in 1986 to describe himself, he listed off a long catalog of descriptors, including performer and television producer, but he concluded with “a husband and a father. And I am a minister.”

Ordained a Presbyterian minister in 1963, Rogers was “a religious person through and through, extraordinarily thoughtful and intentional,” Tuttle writes, “and his faith was constantly present to him.” Without using the overt language of faith on the air, she noted, “Mister Rogers relentlessly preached his gospel: you are loved just the way you are.” (One surprising revelation: During the early years of his television career, he stopped by St. Patrick’s Cathedral in New York to pray on his way to NBC in the mornings.)

During the early years of his television career, Fred Rogers often stopped by St. Patrick’s Cathedral in New York to pray on his way to NBC in the mornings.

The show that became “Mister Rogers’ Neighborhood” began as a 15-minute show for the Canadian Broadcasting Corporation in 1962, “Misterogers.” From the beginning, Tuttle notes, “he got to bring all the insights of his theological and child development coursework to bear.” At the same time, however, Rogers and his wife Joanne’s second son required a hernia surgery that left the boy severely traumatized for years. Tuttle feels that in this event—which Rogers spoke about very rarely—was a key to his ministry with children: "In bearing witness to his son’s trauma, in feeling its fallout, he became Mister Rogers—his purpose crystallized—and he learned, in a way that even the best teachers in the most prestigious institutions of learning couldn’t teach him, what was at stake in children’s lives."

Fred Rogers had strong opinions about television—he reviled and spoke out strongly against most of the programming he saw.

Rogers had strong opinions about television—he reviled and spoke out strongly against most of the programming he saw—but instead of denouncing the medium, he said, “It’s not so simple (or cheap) as writing letters of complaint!” Rather, “we can begin to produce and promote television programs for children as an expression of caring for the children of the whole country.” Instead of “being fed slick stimulating sound-tracked trash,” a child could be taught that he or she “is accepted as he is: happy, sad, angry, lonely, exactly as he is.”

Tuttle also introduces the reader to a previously unknown side to Rogers’s ministry: his care for struggling adults in his life and work. We meet addicts, abuse survivors, lonely and struggling young adults—all telling how Rogers had helped them out of a dark place or, in several cases, actually saved their lives with a kind word or a careful observation. “Fred had a way,” Tuttle notes, “of showing up exactly at the right time, even if he had no logical way of knowing their need.” He knew how to take care of his neighborhood.

This article also appeared in print, under the headline “Husband, Father, Minister,” in the December 23, 2019, issue.