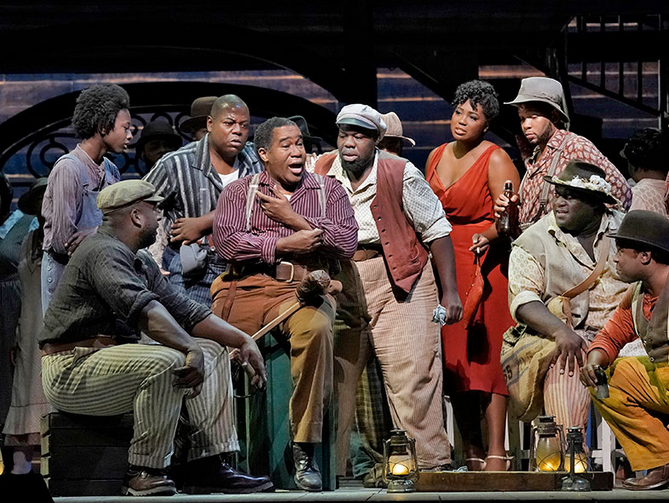 Image via The Metropolitan Opera

Opera is an oft-maligned and misunderstood art form. From the outside, it appears to be a relic of Gilded Age opulence and irrelevant. And yet the high drama and emotion, always a little extra, is also deeply human. At its best, opera provides a window into the past and a mirror into our present. And as the Metropolitan Opera opens its new season with “Porgy and Bess,” opera can be a lens used to confront broader social questions of race, representation and community identity.

Written in the 1930s, George Gershwin’s “Porgy and Bess” has always been controversial. It is the story of a poor African-American community on the coast of South Carolina, speaking in the Gullah dialect, and every aspect of this opera has been scrutinized. It is inescapably a story told through the eyes of the three white men and white women who wrote the novel, play, libretto and music. While Sidney Poitier played Porgy, the disabled peddler protagonist, in the 1959 movie, Harry Belafonte famously refused, objecting to the opera’s perpetuating harmful stereotypes.

At the same time, however, Gershwin’s insistence that the opera feature only an African-American cast and framing this profile of a poor African-American community as quintessentially American was itself a radical statement in his day. Similarly, the Met’s selection of “Porgy and Bess” to open its 2019 to 2020 season provides a locus for deeper conversation on race and gender in art and beyond.

Opera has not been historically known for diverse and ethical representation. Its corpus is full of European composers for whom the exotic was often othered or treated with a jingoistic, pejorative gaze. Two of Verdi’s epic opera protagonists, Aida and Othello, are African characters. As a child, I strongly resisted all of my grandparents’ invitations to the opera until I discovered Aida. One rainy Saturday morning, I found my grandfather watching “Aida” at the Met on television and I was mesmerized. A Nubian princess is torn between forbidden love and love for her oppressed people. It was like a fairytale on steroids, except without the requisite happy ending. (I was, at the time, unaware that Aprile Millo was playing Aida in blackface in the 1989 production. Ten years later, I saw Placido Domingo star in Verdi’s “Otello” without full blackface but with noticeably heavy darkening makeup.)

Opera has not been historically known for diverse and ethical representation.

The Metropolitan Opera has made great strides in diversifying its starring cast and specific outreach through its mentoring programs. All of the stars in “Porgy and Bess” have previously starred on the Met stage. For example, Angel Blue, who captivates as a fragile and deeply human Bess, made her Met debut as Mimi in “La Bohème,” perhaps one of opera’s most iconic roles. But the permanent chorus remains overwhelmingly white with only six African-American members. And the last two seasons saw both Aida and Othello played by white singers.

Opera, like U.S. society at large, struggles to grapple with issues of race and representation. It is unsurprising that Eric Owens, the renowned bass-baritone playing Porgy who has starred in works by John Adams, Mozart and others, told The New York Times that he will never play Porgy as his debut performance at any opera house, describing the role as “one part of an African-American experience.” At a MetTalk, Owens spoke lovingly about the opera as one in which “all are searching for a form of love.” The entire creative team expressed a clear sense of responsibility to the piece and to the African-American community. This intentionality is particularly visible in the artwork commissioned to hang outside the theater, in which Porgy is portrayed as a strong, almost athletic figure, as well as a simultaneous exhibit in the lobby gallery on black opera singers at the Met.

Representation matters for both the artists and the audience. The choreographer Camille Brown shared that she lived across from a black opera singer in college, who felt isolated and alone and eventually gave up opera. In Sing for Your Life: A Story of Race, Music and Family, Daniel Bergner details Ryan Speedo Green’s unlikely journey to the Met stage, in which a school field trip to see “Carmen” at the Met changed everything. A young Speedo Green saw the celebrated African-American mezzo-soprano Denyce Graves star as Carmen, and it opened for him the possibility that black singers could sing opera. When the curtain rises on “Porgy and Bess,” audiences see both Graves and Speedo Green, Blue and Owens, joined by almost 90 African-American performers.

Representation matters for both the artists and the audience.

As I watched this epic and intricate performance, it is the scale that left me overwhelmed with emotion. The audience of the Metropolitan Opera is mostly white. As a white woman, it was striking and important to witness a performance in which the white cast was suspect. In “Porgy and Bess,” the white cast members are the police and town officials who manipulate and threaten the residents of Catfish Row. I could not help but think of Eric Garner’s plea “Why do you always stop me?” as the police harass the weaker residents of Catfish Row simply because they can. Almost 90 years later, “Porgy and Bess” feels sadly current. It felt significant and morally necessary, as a white person, to see an opera on the iconic stage of the Metropolitan Opera in which almost no one looked like me. Afterward, a friend and I shared hopes that the outcome of this production might be that the Met would consider an all African-American casting of “La Bohème.”

As an opera, “Porgy and Bess” is about far more than race. As I watched the hurricane scene, alongside friends from New Orleans, I was transported back to Sandy and Katrina. Exacerbated by years of opera and ballets in which violence against women is simply an assumed and unexamined plot element, my sister turned to me at the end and asked, “Can we please see something without violence against women?” In her tragic vulnerability, Bess gives voice to so many women who internalize and accept violence as normal. When one in four women will experience intimate partner violence, it would be wrong to dismiss Bess as a stereotype or weak.

Perhaps the greatest accomplishment of this production is the ability for something to be deeply particular while still inviting us to reflect upon our own universal humanity at the same time. It is this that makes opera as an art form so compelling. And by centering non-white communities, opera can continue to do so.

The evening we went the audience was well represented amongst all God's "chillun". It was a stirring performance, and I was left to wonder , as you, how "La Boheme" could have been performed with the same cast.
Been attending the MetOpera since 1971 when student tix were $3 (like the Orange tix at MSG). If you want my tix to "The Nose" or anything by Alban Berg, just let me know.

"It is inescapably a story told through the eyes of the three white men and white women who wrote the novel, play, libretto and music."

The stark fact in the above line was never known to me.

I used to judge it anti-Christian on hearing Aretha Franklin singin' and gave it no mind for the rest of my life.

To get into heaven, don't snap for a second
Live clean forget your faults
I take the gospel whenever it's possible
But with a grain of salt

To get into heaven, don't snap for a seven
Live clean forget your faults
I take gospel whenever it's possible
But with a grain of salt

This article also appeared in print, under the headline “Representation at the opera,” in the November 11, 2019, issue.