Review: Melinda Gates and her struggles with the Catholic Church 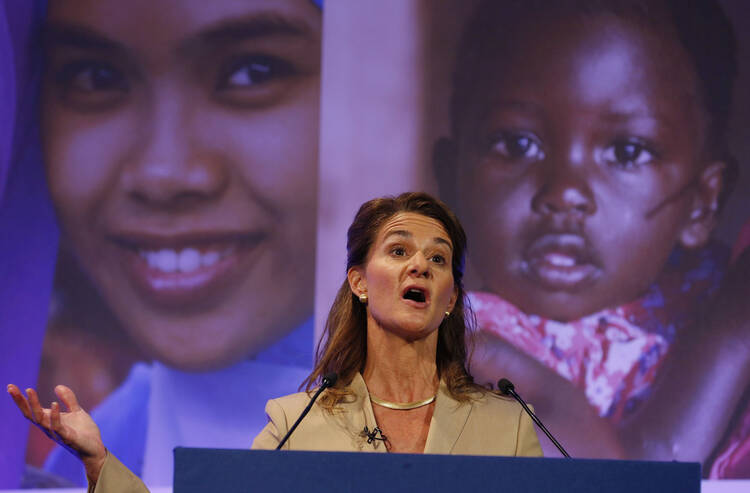 In her new book, The Moment of Lift: How Empowering Women Changes the World, Melinda Gates shares her experiences building the Bill & Melinda Gates Foundation, especially the time she spent on the margins listening to people her foundation serves. She emphasizes how the things she saw and heard from women shaped her charitable work and pushed her to focus on gender equality.

The Moment of Liftby Melinda Gates

Melinda Gates is Catholic, and the book raises a question many Catholics wrestle with: Can you take actions in conflict with a teaching of the church and still be part of the church?

In 2012, the Bill & Melinda Gates Foundation pledged $560 million to increase access to contraceptives; Melinda Gates writes that making contraceptives available is about following her conscience, which has been formed by the teachings of the Catholic Church. Her decision to publicly support and fund birth control initiatives was the subject of a front-page story in the Vatican newspaper L’Osservatore Romano, in which Giulia Galeotti, a frequent contributor on abortion and other life issues, said that Gates was “off the mark” and the victim of “bad information and persistent stereotypes on this theme.”

“I was putting my faith into action when I went into the field and met the women who asked me about contraceptives,” Gates writes. To help women who want to space their pregnancies for their health and the health of their children “aligns with Christ’s teaching to love my neighbor,” she writes.

The Moment of Lift is not an attack on Catholicism but an honest accounting of how Melinda Gates came to be in conflict with the church while living her faith.

The book is not an attack on Catholicism but an honest accounting of how Melinda Gates came to be in conflict with the church while living her faith. She writes that an all-male hierarchy makes rules that hurt women but is grateful for the nuns at the high school she attended (Ursuline Academy in Dallas), who taught her the importance of hearing the cry of the poor. She also shares how a Marriage Encounter weekend affected her parents and the immense gratitude she feels toward women religious who dedicate their lives to serving the poor.

The Moment of Lift also weaves together stories of Melinda Gates’s family life and marriage. These anecdotes add vulnerability and personality to an account by a woman whose extreme wealth could otherwise make her seem unrelatable. (She is careful not to imply a false sense of equivalence between her life and those of the poor.) From asking Bill to leave her first public speech because she was nervous to her shock that her husband would offer to drive their daughter to school, she offers a candid account of striving for an equal partnership with Bill Gates.

This article also appeared in print, under the headline “Catholic with conflicts,” in the August 5, 2019, issue.

Emma Winters was a Joseph A. O’Hare, S.J., fellow at America.