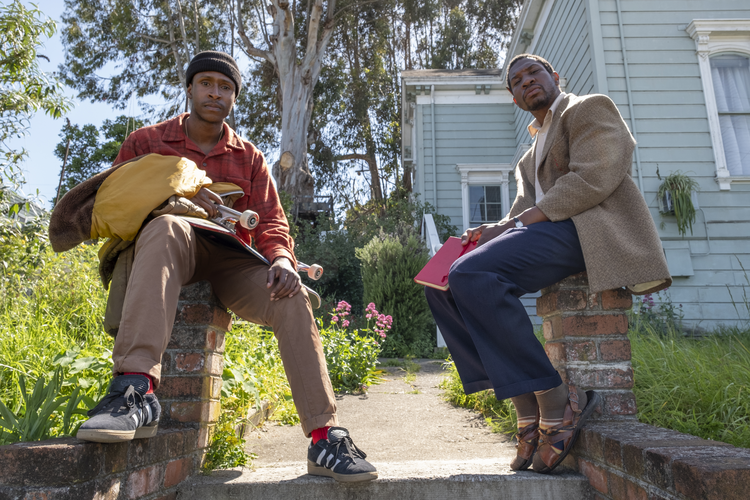 Jimmie Fails and Jonathan Majors star in "The Last Black Man in San Francisco." (A24 Films)

The sociologist and activist Jane Jacobs’ 1961 book The Life and Death of Great American Cities has a title that cuts close to the bone for many San Franciscans who feel like the city they once knew is no longer there. For the characters wrestling with the question of staying or going in the new film “The Last Black Man in San Francisco,” Jacobs’ statement that “cities have the capability of providing something for everybody, only because, and only when, they are created by everybody” may feel like it no longer applies to their hometown as the history of San Francisco’s black community is steadily erased.

San Francisco, created and recreated by waves of arrivals who have often elbowed off the people who lived there before them, today exists mostly for the rich. But San Francisco native Joe Talbot’s debut film, the story of a black man in San Francisco trying to reclaim his family home, presents us with a more complicated picture. It raises a question that might ultimately apply to any city where families have lived for generations and faced questions about leaving: what does it mean to belong to a place?

Joe Talbot’s film raises the question: what does it mean to belong to a place?

From its first frames, Talbot’s film, with lush cinematography by Adam Newport-Berra and a dreamlike soundtrack by Emile Mosseri, shows us a side of San Francisco rarely depicted in film. Rather than depicting its downtown or the iconic Golden Gate, the movie begins in the Hunter’s Point neighborhood, one of the few parts of the city not yet fully gentrified by tech workers, but also an EPA Superfund site so contaminated with radioactive waste from its days as a Naval base that the mostly black population of the neighborhood has disproportionately high rates of asthma and cancer. But Talbot makes Hunter’s Point look beautiful. Even the poisoned water of San Francisco Bay, where nine gray whales have washed up dead in just the past few months, shimmers in the background throughout the film.

As the film moves locations to the city’s historically black Fillmore district, where the protagonist’s grandfather’s home is located, Talbot chooses not to show visual depictions of gentrification. Instead he only gives the audience glimpses of a few white faces. That means that the film’s version of San Francisco is focused on its vanishing black community, which represents only 6 percent of the city’s population, yet also represents nearly 50 percent of its officer-involved shootings. Jimmie, the main character, and several other black male characters share criminal pasts that are alluded to. The film explains that the stately Fillmore Victorian house Jimmy is obsessed with and later squats in once belonged to his grandfather, but was lost to the family because of his father’s criminal proclivities.

That family house and Jimmie’s obsession with re-occupying it become the central story of the film. But the house also represents a time when black people played a more prominent role in shaping San Francisco. Talbot, who is white but was born and raised in the city and has watched gentrification change its landscape, understands the complexities of loving a place that does not always treat you well. While Talbot is white, much of the cast consists of black actors from the city. Jimmie Fails, who plays the lead character, co-wrote the film and grew up as Talbot’s best friend, and Jamal Truelove, who plays a member of the film’s street gangster Greek chorus, are both San Francisco natives, as is Danny Glover, who plays another character’s father.

The family house and Jimmie’s obsession with re-occupying it become the central story of the film.

In a surreal twist, a month before the film was released, the San Francisco Police Department paid Truelove a settlement of 13 million dollars after he was falsely convicted on a murder charge and spent six years in prison. San Francisco has never treated its black citizens with much in the way of equity, and what the film gets across is the sense that loving a place, which the film’s characters clearly do, doesn’t necessarily guarantee it will love you back. The violence in Talbot’s film occurs offscreen and is embedded in its characters’ histories, and this too makes it different from other films about black people in America. Beauty, instead, remains the film’s focus.

After the release of Barry Jenkins’ film “If Beale Street Could Talk,” questions of whether the films’ sheer beauty overwhelmed James Baldwin’s message about the dangers young black men face in America rippled through several reviews. But beauty is not reserved for any particular class or race, and San Francisco’s beauty is inarguable: generations of people arriving in the city have fallen in love with it. Gentrification will never change that. The beauty at the heart of Talbot’s film is also the beauty of friendship, and particularly the kind of close, affectionate male friendship rarely shown on film. The relationship between Jimmie Fails’ character, also named Jimmie, and his best friend Montgomery, played by Jonathan Majors, is an affecting portrait of two men drawn to one another because they don’t fit in.

Beauty is not reserved for any particular class or race, and San Francisco’s beauty is inarguable.

But in order for an audience to care about a character, we have to be invested in them, and that may be the primary flaw of “The Last Black Man in San Francisco.” Jimmie is a kind of enigma, a man with a troubled past we know little about. He is a man of few words, and as the movie goes on and the mythologies around his family’s house begin to fall into place, only gradually does he become more empathetic. Jimmie serves as a kind of stand in for entire communities who have experienced gentrification, and as a result, his character does not feel fully drawn. There is also a plot twist near the end that involves Montgomery writing a play that contains a gimmick that’s about as old as Shakespeare’s “Hamlet.” Its effectiveness is blunted by its somewhat predictable results.

In spite of those flaws, however, it’s likely that the filmmakers’ own love and affection for San Francisco will carry through to audiences outside of the Bay Area. When I saw the movie at Oakland’s Grand Lake theater among a racially mixed crowd, it felt like the Bay Area might still be holding on to some of the diversity that it holds up as part of its core values. Then I walked to my car past a newly opened wine bar where the stylishly dressed young white clientele sat stroking their dogs and sipping rosé. The wine bar had, until recently, been an Ethiopian restaurant. Real estate signs were clustered on every street corner, and on that day, the average home price in Oakland was $700,000. In San Francisco, it was over a million. The bar’s sidewalk chalkboard listed the price of drinks, starting at $15 a pour.

The ONLY reason 6% survive is most probably attributed to California's foresight into establishing Prop 13, long the deign of the now empowered and indeed, entrenched liberal DEM state legislature majority, who would dismantle Prop 13 if they could. Prop 13 freezes one's property taxes on main family residence at the rate at that time in which one bought the house, and that tax saving can be passed on generationally. Moderate income families are NOT FORCED to sell the family house to PAY TAXES. (Pay attention lib America crowd, you're screwing minorities here and pushing people out of S.F., Harlem and every other tradition black urban neighborhood).

Kaya Oakes is a contributing writer for America.

The history behind the SCOTUS ruling on funding religious schools: Blaine Amendments
Could the ruling really mark the end of Blaine amendments?
Nicholas D. SawickiJuly 01, 2020

Podcast: Will the new commission on women deacons turn out any differently from the last one?
This week on “Inside the Vatican," Colleen Dulle speaks with Phyllis Zagano about the church’s history not only of ordaining women deacons, but also the conversation around ordaining them again.
Colleen DulleJuly 01, 2020