“The Hate U Give” confronts racial tensions while avoiding despair 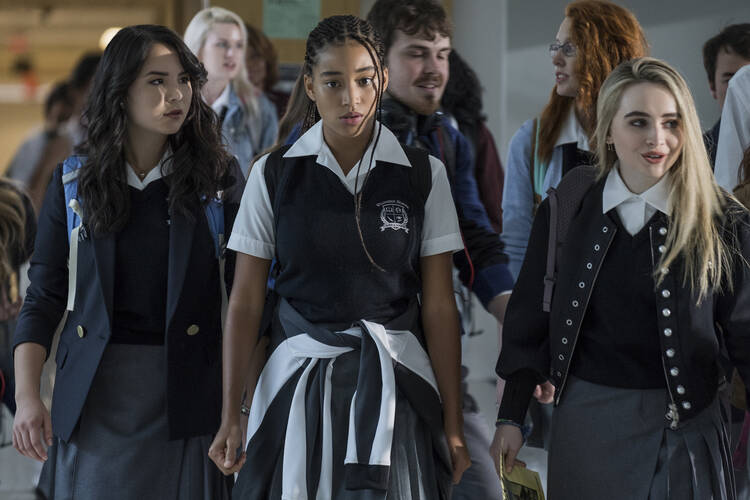 The Hate U Give, the 2017 young adult novel by Angie Thomas that has been recently turned into a popular film, sanitizes nothing in its exploration of racial injustice in the United States. And yet the film does not sink into hopelessness. This a tall order for a story about a teenager who witnesses a police officer shoot her childhood best friend.

Amandla Stenberg, who plays Starr Carter (the witness to the police murder) in the new movie, carries the story’s complexity. Stenberg shines as bright as her character’s name implies—conveying equal parts devastation, grit and charisma.

Starr exists in two worlds: Garden Heights, the predominantly black neighborhood where she lives, and Williamson Prep, the majority white school she drives across the city to attend. In Garden Heights, Starr feels uncomfortable at a party full of people, most of whom know each other better than they know her. At Williamson, Starr feels pressured to change her language and mannerisms to avoid being “othered” by her white classmates.

“The Hate U Give” goes beyond the 30-second news clip, the brief montage of protest footage and the talking heads of cable news.

Starr is spunky and incisive. “If a rapper would say it, I don’t,” Starr says in her internal monologue. And as she points out, the slang that makes her white classmates sound cool makes her sound “ghetto” at Williamson. As hard as Starr tries to keep her two worlds separate, that becomes impossible when her friend, Khalil, is shot in front of her.

Now Starr must answer police questions, speak for Khalil on television and testify before a grand jury, because who else will explain that Khalil was holding a hairbrush—not a gun? And at the same time, she has to show up to a school where students pretend to protest against Khalil’s murder as an excuse to get out of class.

“The Hate U Give” goes beyond the 30-second news clip, the brief montage of protest footage and the talking heads of cable news. It does not dwell on death but focuses mainly on all the people who must go on living after senseless violence erupts in their midst.

It is hard to admit how numb I have become to violence shown on TV and shared on social media. “The Hate U Give” cuts through that numbness, painting a mural of human emotion where media portrayals of violence offer only a drop of splattered paint.

It is hard to admit how numb I have become to violence shown on TV and shared on social media.

Some of this is difficult to watch, like Starr waking up from violent dreams about Khalil’s murder and vomiting. But if you said you walked out of “The Hate U Give”without laughing, I would wonder if you walked into the wrong theater. Starr’s older half-brother, Seven (Lamar Johnson), and her younger brother, Sekani (TJ Wright), bring depth and joy to Starr’s world.

Sekani steals bacon from Starr’s plate. Seven pounds on the window of Starr’s limousine on prom night, which interrupts a moment between Starr and her white boyfriend, Chris (K.J. Apa of “Riverdale”). These are welcome moments of levity, as is the scene when Starr introduces Chris to her father, Maverick (Russell Hornby). Starr’s father, a man who has committed the entirety of the Black Panther Party’s 10 point program to memory, wastes no time pointing out that Chris is white.

The movie is clear that Starr comes from a violent neighborhood, especially as tensions escalate between Starr and the leader of a local gang who is angry that she identified the gang in a television interview. Starr’s family, however, is a refuge of joy and love.

Her parents are affectionate to each other. Starr calls them her “O.T.P.” (One True Pairing, an acronym for a favorite couple). The Carter family prays together in a restaurant, and they talk to God like someone they know. Starr’s parents are protective of her and make sure she knows her worth.

“The Hate U Give” is a film that holds opposing realities hand-in-hand: a violent gang and a loving family; Starr’s callously indifferent white classmates and black church members who say “amen” to calls for justice; a murderous cop and a boy who spent his life trying to protect his family. These elements, well-acted and well-adapted from the New York Times-best-selling book, make the movie compelling.

Through all of this, Starr emerges as a locus of hope, power and justice. Isn’t that a lot to ask of a 16-year-old girl?

JEE Main Hall Ticket 2019 will be released online on the official website of JEE Main – jeemain.nic.in. Candidates can download JEE Mains 2019 admit card once released by NTA. The JEE Main Exam is held two times in a year. Staff Selection Commission will announce on the official notification, which will provide the necessary information about the SSC MTS Vacancy 2018.

this is the key point... The movie is clear that Starr comes from a violent neighborhood, especially as tensions escalate between Starr and the leader of a local gang who is angry that she identified the gang in a television interview. Lash Extensions Thanks

Inside the early times, kings and their queens employed to dress in royal attires to boost their royalty and beauty. Prom gowns and Pageant gowns have a significant in maintaining the royalty degree. Similarly, from the present day era, every single lady needs to seem distinctive and royal. In addition, each and every girl desires to be a show-stopper of any get together the Prom and Pageant Gowns