Meet Atticus, the Instagram poet who never takes off his mask 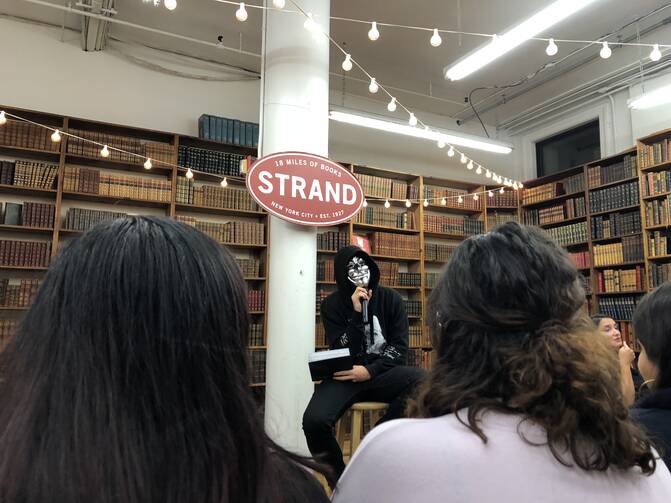 Atticus reading at The Strand bookstore in New York City.

Atticus entered the poetry reading at The Strand in New York City in black jeans, a black hoodie with the hood up (a piece of his own merchandise) and a silver mask with an unnaturally stretched smile. The audience clapped enthusiastically as he sat down at the stool in front of the room.

“Holey-moley so many people on a stormy night and a Jewish holiday,” Atticus opened. “I’m a little hot do you guys mind if I take off my mask?” Gasps, cheers and “yeahs” moved through the crowd. “Ok, I’ll take it off,” Atticus said. An anxious hush fell over the crowd as Atticus removes his mask to reveal...another mask, the same, silver one.

Atticus writes all of his poetry pseudonymously. When he appears publicly, he always wears a mask that fully obscures his face. He said he does not worry a lot about his identity being revealed, but he wears the mask as a symbol to “remind himself to always write what he feels instead of what he thinks he should feel.”

Atticus is a poet who is immensely popular on Instagram, with more than 840,000 followers. Because he stays anonymous and behind a mask, it is hard to say how old he is. Based on his style and voice he seems to be in his late 20s to early 30s. According to the book jacket of his latest poetry collection, The Dark Between Stars, “Atticus is a storyteller, observer…. He loves the ocean, the desert, whiskey and playing with words.” And if his reading on Sept. 10 was any indication, he has an almost cult-like following.

“Someone should ask him: What’s his favorite whiskey?” I overheard a young woman sitting in front of me say before the reading started. As I waited for my pants to dry from my rainy walk to The Strand, I looked around the rare books room and was surprised by the crowd. I had been expecting a room full of eighth grade girls who wanted to feel #deep, but I was surrounded by a diverse group of adults and older teens.

Most of Atticus’ poems were short and aphoristic. An entire page in The Dark Between the Stars is devoted to this short poem: “IT’S ALWAYS SAFE/ TO DO NOTHING/ WHEN IT RAINS.” Another full page reads: “Art has the answers/ to many/ of the questions/ we weren’t brave/ enough to ask.”

Atticus read several poems before he opened the floor for questions.

Art has the answers/ to many/ of the questions/ we weren’t brave/ enough to ask.

A woman in the back of the room asked: “Where do you draw your inspiration?”

“That is a great question,” Atticus said. “Are you a writer?”

She said yes, and Atticus asked what she wrote. The woman said that lately, she had “an inspired burst of poems come” to her. “Cool,” Atticus replied. “You should DM me,” meaning send him a direct message on social media. He had this interaction with six other fans throughout the night.

Right now, there is a whole swath of Instagram poets publishing new work on social media and in print. The most famous is Rupi Kaur who has over 3 million Instagram followers and has published two books, milk and honey and the sun and her flowers. Other Instagram poets or “Insta-poets” include R.M. Drake with 1.8 million followers, Christopher Poindexter with 347,000 followers, Cleo Wade with 433,000 followers—and many others.

These Instagram poets seem to be trying to cut through Instagram’s superficiality. For instance, a poem of Kaur’s states “their concept of beauty/ is manufactured/ i am not” and a short note of Wade’s reads “NO ONE’S DAY IS WHAT/ YOU THINK IT IS./ BE EXTRA LOVING/ IF YOU CAN.” All of these Insta-poets seem to be saying, “Let’s really connect, through the beauty of our words rather than the beauty of our bodies. Let’s be real. Let’s be authentic.”

He said he often wished people at events like this one could see him smiling.

But in the middle of this movement is Atticus, a guy in a mask. A mask creates a barrier between you and another person. A mask is not a connection.

Even as he sits in front of a room full of fans Atticus seems to know this. Later in the evening, a fan asks Atticus: Do you ever want to take off your mask? “All the time,” Atticus replied. He said he often wished people at events like this one could see him smiling. For Atticus, the symbolic nature of his mask is a reminder to “always write what he feels,” but it impedes his ability to connect with fans in real life. Because the truth is Atticus could take off his mask, smile and keep writing.

Atticus took a few more questions. He then read from his latest book, took questions, read from his latest book, took questions. The question and answer portions of the night eclipsed the reading, with fan after fan anxiously and eagerly rising to pose their queries. And if you’re wondering, someone did ask Atticus what his favorite whiskey was: It’s Johnny Walker Black. He also said that sometimes he drinks rosé and his poems get really bad. At one point, Atticus said he hopes his work and social media presence will be “a gateway drug to classical literature.”

He kept insisting on how beautiful it was that we were here to talk about love. But as the evening wore on, it felt more like we were here to talk about Atticus. Fans asked: Do you have any thoughts about your third book? (His second book had been released less than a week ago.) Have you considered writing a novel? (Atticus said yes. Although, most of his poems are 15 to 50 words long.) Have you always been a writer? (He spoke about the inspiration of his mother. He had dedicated his second collection to her for “leaving poems where I would find them.”) All of the fans said they loved Atticus’ work or had found it inspiring before asking their questions.

He hopes his work and social media presence will be “a gateway drug to classical literature.”

Atticus shared what gets him going when he is not in the mood to write. His list is a hipster’s paradise: candles and incense, his record player and Monet. He loves Paris. Atticus said criticism does not really affect him. “If people don’t like it, I don’t really want to share with them. I don’t care.” He emphasizes that the community in a room like the one we are in is much more important.

At the end of the night, there was a distinct shift in mood from excited fangirling to a somber note. Atticus said he wanted to share with us “one of the most profoundly human things that ever happened to me.” He told a story about how he had recently visited a fan in the hospital. Her name was Alina and she was dying of cancer. A friend of Alina’s had contacted Atticus to ask for an advance copy of his book, particularly the audio version because Alina was too weak to read. Instead, Atticus visited Alina and read to her as she died.

Atticus told us that before Alina’s death, it was evident she could hear him. After reading some of his own work, he read aloud poetry that Alina herself had written. Atticus said that as he read a poem Alina had written about goosebumps, goosebumps ran up her arm.

Everyone in the audience seemed fully enraptured by the story, but I felt somehow outside of the moment. I thought it was kind of Atticus to visit this woman who was dying. And I was sad for the young life lost and Alina’s grieving family. But masking my emotion was the physical mask on Atticus’ face.

Had Atticus been wearing a mask when he visited this woman in the hospital? The question nagged at me. It was all I could think as I sat there. The thought crept in and swallowed my emotion. Despite Atticus’ insistence that his mask helps him express himself more honestly, as a reader, a reviewer and an audience member, it prevented me from connecting with him.

He is very provocative in his mask. It would be desirable, that such as he were more popular and it was possible to find tickets for them on such sites as this https://best-vegas.com/las-vegas-event-calendar/. It would be much more pleasant to see and pay money for something more reasonable and sublime than anything that is offered on that site.