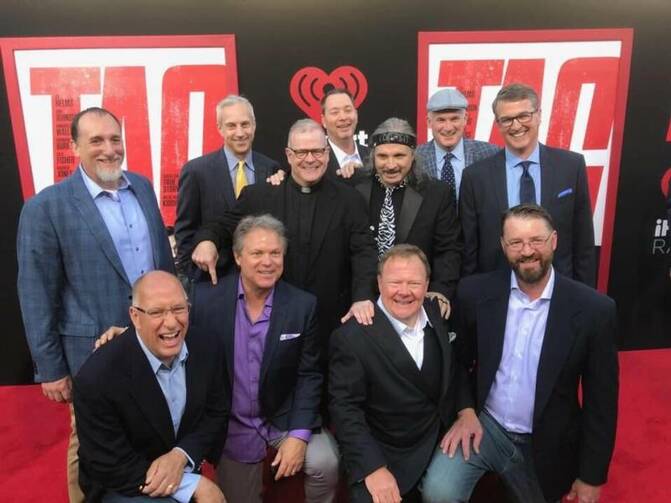 WASHINGTON (CNS) -- A group of Catholic high school friends has kept in touch -- literally -- since graduating more than 30 years ago from Gonzaga Preparatory School in Spokane, Washington.

The way they've stayed connected -- through essentially continuing a version of tag they started in high school -- has received mixed reaction from people over the years, but that all changed five years ago when The Wall Street Journal ran a front-page article about them.

The piece gave the group almost instant notoriety, as it was followed up by an ESPN segment and a slew of other interviews. The group of 10, who call themselves the "tag brothers," hired an agent and started talking about movie potential.

Fast forward years later and now, they're "it" -- to use a tag expression -- because the story of the elaborate ways they've sneaked up on each other, sometimes in disguise, for one month of the year -- as per their signed agreement -- is now on the big screen in the movie "Tag," which releases nationally June 15.

The movie takes the story of this group and runs with it, so to speak, with a fictionalized account. The original 10 friends -- nine graduated in 1983 and one in 1984 -- includes one priest, Father Sean Raftis, pastor of St. Richard's in Columbia Falls, Montana. At a reunion, the group was talking about their competitive high school tag and came up with a plan to continue it long distance every February.

In the movie, the group is made up of five friends who have been together since elementary school played by Ed Helms, Jeremy Renner, Jon Hamm, Jake Johnson and Hannibal Buress. Like real life, the movie tags occur at unlikely places including a funeral home and the hospital delivery room.

Review: How the godmother of punk became a Dame of the British Empire
Raymond A. Schroth, S.J.

The tag game, like what kids play at recess, involves tagging someone and making them "it" until they tag someone else. This grown-up version isn't so much running around as it is sneaking up on people who live in different states and have careers, families or ministries. The last person tagged at the end of February is "it" for the year.

The Wall Street Journal story that made this group famous points out that "players get tagged at work and in bed. They form alliances and fly around the country. Wives are enlisted as spies and assistants are ordered to bar players from the office."

The story highlighted one of the tags in the 1990s that involved Father Raftis hiding in the trunk of a Honda Accord waiting for Joe Tombari, who lived in California at the time but now teaches math and physics at Gonzaga Prep where the game began.

Mike Konesky, another tagger, drove the car over to Tombari's with the idea of showing him new golf clubs in his trunk. When the trunk opened, the priest reached his hand out to tag Tombari but didn't realize he actually reached his friend's wife who was shocked to see a hand reach out of the trunk, fell backward and hurt her knee.

When everyone attended to Tombari's wife, Tombari, of course, was tagged.

In a June 10 interview with Father Raftis from Montana days after he returned from the premiere of "Tag" in Los Angeles, the priest told Catholic News Service that the 15 minutes or so he was in the trunk felt like hours. He also felt bad that it involved an injury.

A decade or so later after this tag, Tombari and Konesky went to Montana to nab Father Raftis at church. The two sat in the front row and when the priest saw them he ended up mentioning the game in his homily, stressing the importance of friendship. His friends waited until Mass was over to tag him and then they went out for coffee and doughnuts with parishioners after.

The best tag Father Raftis remembers was when his friend since first grade, Mark Mengert, dressed up like Gonzaga's mascot, except in the high school's costume, and tagged Brian Dennehy with a note while he was attending a Gonzaga University basketball game with his wife, all while the real mascot looked over and raised his arms in confusion and security questioned the fake mascot.

All of this sneaking around, at its core, is about friendship and staying connected, said Father Raftis, adding that our whole faith is based on friendship with the communion of saints and angels.

All of this sneaking around, at its core, is about friendship and staying connected, said Father Raftis, adding that our whole faith is based on friendship with the communion of saints and angels.

The movie, he said, "gets the friendship thing right." He notes that it has an age-appropriate R rating for language but the "overwhelming arc of the movie is on the beauty of friendship and staying friends."

The movie has not yet been rated by CNS. The end features a clip of the original group. But this moment of fame isn't stopping them. Father Raftis said they plan to keep playing "indefinitely, as long as we can."

All of the tag brothers attended the movie's premiere in Los Angeles June 7 and they joined several members of the cast the night before at a dinner at Renner's home.

This has all been pretty surreal for the Montana priest, who was surprised to see "Tag" on billboards and bus advertisements in Los Angeles. When there was initial talk about a movie about the group, he said he thought it would be for DVD release or on the Hallmark Channel, which is fine, he added.

The movie openings, including one June 12 in Spokane where the original tagging began, is providing a rare chance for the group of tag brothers to be together.

And that's where the movie comes full circle because, as he put it, the point is: "Get a hold of someone you haven't been in touch with for a long time and rekindle the friendship."