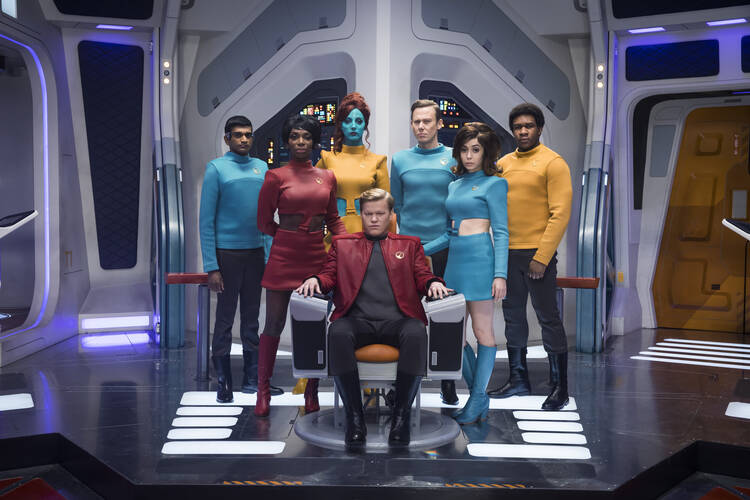 Netflix’s science-fiction anthology series “Black Mirror” has made a name for itself imagining dystopias just around the corner from today. Its impact, however, has been less a matter of its oft-prescient nightmares about the implications of present-day technology than its insights into the fears and aspirations of our humanity.

Whether telling the story of a world in which social media ratings have become the currency of class and access, or of a grieving widow’s attempt to use her dead husband’s online presence to recreate him, the best “Black Mirror” stories ground themselves in a concrete human question or struggle: Can I keep my child safe? Can I trust my partner? Will I ever find “the one”—and if I do, will the world allow us to be happy? These latter-day “Twilight Zone” tales might be about human life 15 minutes from now, but they are always most fundamentally about that human life.

Or so one hopes. Watching the newest season of “Black Mirror,” which debuted on Dec. 29, the focus is not always quite so clear. A few of the six episodes, including the baby-monitor-as-permanent-inbuilt-surveillance-scheme “Arkangel” and dating-app-to-the-extreme “Hang the DJ” sit very well in the Mirrorverse, grounding innovation and its nightmarish discontents in the deepest of our human yearnings. (If you only watch one episode this year, make it “Hang the DJ”; both the performances and the story of two people longing for one another in the face of their society’s relationship-determining algorithms is both compelling and sweet.)

The best “Black Mirror” stories ground themselves in a concrete human question or struggle: Can I keep my child safe? Can I trust my partner?

“Crocodile” also comes close, drawing the idea of memory harvesting through the unexpected lens of insurance claims adjusters to create a fantastic Hitchcock-meets-O. Henry morality play about the seemingly endless consequences of one awful decision.

The season’s other episodes, though, seem to set aside any real exploration of humanity for big premises. Charlie Brooker, the show’s creator, has long been fascinated by the possibilities of memory or personality downloads. And married to deeply human concerns like grief, fear or love, this interest has created some of the series’ most powerful moments. (“The Entire History of You,” “Be Right Back” and “San Junipero” are must-watches.)

But in the new season we get the downloading of real people into a virtual world, which I’m pretty sure wasn’t a new idea when Disney did it in 1982 in “Tron.” Another episode posits digitizing a person into a hologram, downloading them into a teddy bear or, most preposterously, your unused brain space. (As Willa Paskin points out in Slate, one of the greatest problems with “Black Mirror” is that its characters have so little real skepticism about even the most invasive of technologies.)

As Willa Paskin points out in Slate, one of the greatest problems with “Black Mirror” is that its characters have so little real skepticism about even the most invasive of technologies.

The episode “USS Callister,” about a shy genius programmer who steals his co-workers’ DNA and creates digital copies of them in a virtual recreation of a “Star Trek”-like series, where he torments them, is the season’s greatest disappointment. The performances are great, but the episode turns deeply troubling when it begins vilifying the programmer. After he adds a copy of new staff member Nanette (Cristin Milioti)—who showed interest in him before his co-workers painted him as a pathetic creep—to his weird 1960s sci-fi menagerie, what was your standard “revenge of the bullied” parable morphs into a tale of ordinary people finding a way to fight back against the Gamergate losers of the world.

Other than Nanette, no one in “USS Callister” is innocent. To paint matters otherwise, as Brooker does, is to allow the programmer’s victimizers to excuse themselves from any responsibility. At a time when American society is finally showing a willingness to hear and face the stories of men behaving atrociously, such a choice is satisfying, but a gross oversimplification.

Given the fast-changing world that we live in, and the perennial moral conundrums of our lives, there is no end of interesting material for “Black Mirror” to consider. And the series remains one of the very few places where you can find a real exploration of the moral and social questions of our day.

Unfortunately, much of Season 4 plays less like a deep dive into the human condition in the modern era than another needless iPhone update. One lives in hope for OS 5.