‘The Florida Project’ is a rare perspective on American poverty 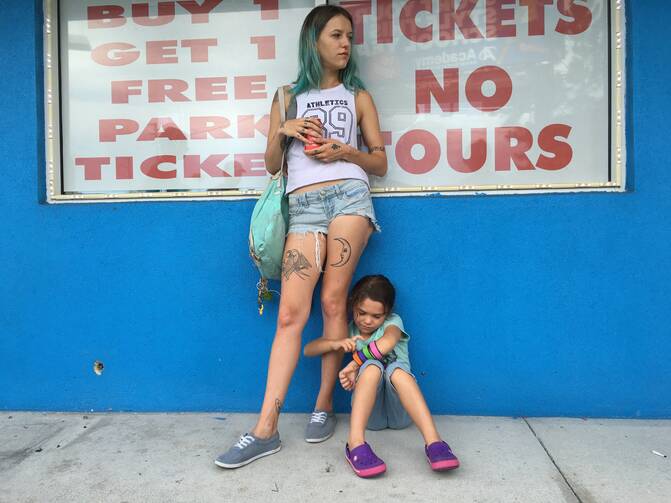 “The Florida Project,” directed by Sean Baker and already one of the year’s most critically acclaimed films, tells the story of a mother and daughter in the hidden world of extended-stay motels in the city of Kissimmee, Fla., living on the cusp of homelessness. There is a whole community here, defined by extreme poverty, living in the shadow of Disney World.

Halley (Bria Vinaite) is a young single mother. She is unemployed and hustles on the outskirts of Kissimmee, stealing, begging and even selling cheap perfume on the street. She does what she needs to do to keep a motel roof over her head—the last thing between her and homelessness. Her young daughter Moonee (Brooklynn Kimberly Prince) and her friends Jancey (Valeria Cotto) and Scooty (Christopher Rivera) run amok in the motel, mostly unsupervised, having adventures and finding joy in each other, seemingly unaware of the desperation around them. Throughout the film, we see the loss of innocence that poverty forces upon children.

Throughout the film, we see the loss of innocence that poverty forces upon children.

Bobby (Willem Dafoe) is the handyman and office manager of the motel, yet he is clearly much more, doing his best to help the residents and look out for everyone, especially Moonee and her friends, even as he attempts to keep a semblance of order. While Dafoe is one of the few actors in this film audiences will recognize, he is by no means the only great member of this phenomenal cast. All bring depth and humanity to their roles. The compassion they bring to the film is what gives “The Florida Project” such a rare perspective on poverty in the United States, especially when we are too often quick to assume the worst of those in this condition.

I recently spoke with Ed Travis, director of the Community Cinema at the Community First! Village, run by Mobile Loaves and Fishes, a Catholic ministry focusing on the homeless in Austin, Tex. Mr. Travis hosted a screening of “The Florida Project” for the residents of the village, many of whom suffer from chronic homelessness. Many of the issues depicted in the films are real for residents of the village.

“What Sean Baker is able to do is insert the nuance of life on the edge of homelessness,” Mr. Travis says. He says this kind of film is significant because “it could soften people’s hearts to what life is really like when you are struggling. And people’s hearts really need to be softened.”

While “The Florida Project” never advocates for a particular policy proposal, it is more than simple entertainment. Throughout the film we watch how the rest of society ignores those living in desperation. Helicopters fly in and out behind the motel, presumably taking the affluent on tours and reminding us of a world that is starkly different from the one Halley and Moonee live in.

The film calls the viewer to be more understanding, even forgiving, of the “choices” made by the desperate.

The people of the motel can see this well-off world, and they express their resentment as best they can, such as when Moonee follows her mother’s example and makes offensive gestures at the loud and disruptive helicopters. I found myself wondering, “Who is in the helicopter? Did they see the mother and small child flipping them off? If, so what did they think? What would I think?” These questions came back to me over and over again as I continued to process the film. In what ways are my own judgments too quick or too harsh? Are my own actions compassionate enough?

The ending of the film left me a bit confused, and while I will not give away any spoilers, I will say it is not a clean resolution. But the mission of serving those on the margins is not about a resolution. Ed Travis and the residents of Community First! live that lesson every day, struggling and doing the best they can because it is right thing to do and not necessarily because there is hope for a happy ending.

If we, too, could learn that lesson, maybe we would judge a little less and see the dignity of the poor, the desperate and those on the margins a little more. Maybe this new perspective would cause us to question the cheap magic and commercialized happiness of tourist resorts and Disney parks, or to at least peek behind the curtain a little more.

This is the small contribution I hope that the “The Florida Project” will make. Let us all be more understanding, even forgiving, of the “choices” made by the desperate.

We would be a better country if we did.