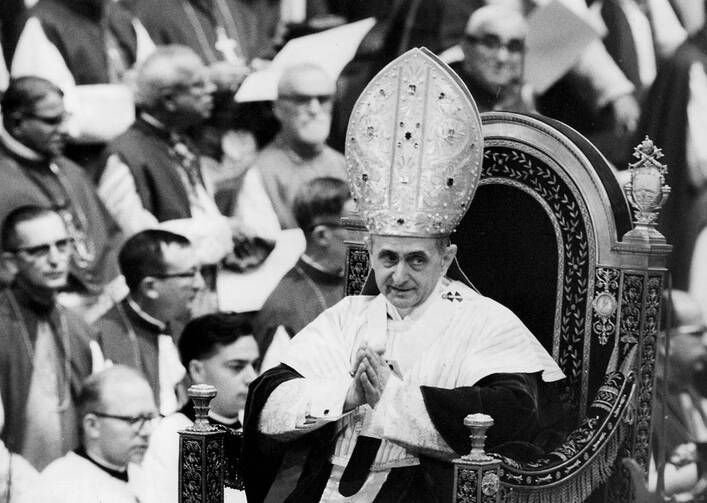 Reading a book by Massimo Faggioli is like touring an adventure park. Each chapter is another aerial thrill ride. Ideas in Faggioli’s hands are like quicksilver. Readers may only gain a slight grasp of one idea before they are hurried on to another.

Faggioli writes intellectual history at an especially high level—bordering on social theory. The topics that interest him are the broad movements of church history, the oscillation of ideas over time and the transient resolutions of the inherent tensions in the human/ecclesial condition: between local community and universal church, between an imposed Catholic universalism and a living universal (global) church, between tradition and historical consciousness, between movements and institutions.

Today, he believes, the reciprocity of church and world brought about by the Second Vatican Council allows the church to become a bearer of moral vision and ultimate meaning in the face of the dual crises of the secular, democratic state and global capitalism.

The focus of Catholicism and Citizenship is the evolution of the public role of the church from the time of the Second Vatican Council to the papacy of Pope Francis. According to Faggioli, the “Pastoral Constitution on the Church in the Modern World” set the course of the church’s engagement with the world over the last 50 years. The constitution was the council’s last and most mature fruit. It benefitted from the deliberations that preceded it, but it also had the advantage of embodying “the spirit of the council,” of which the bishops had finally become aware.

Key for Faggioli is the constitution’s No. 43, a passage that rejects an otherworldly Catholicism for full immersion, especially for lay people, in the world. Today, he believes, the reciprocity of church and world allows the church to become a bearer of moral vision and ultimate meaning in the face of the dual crises of the secular, democratic state and global capitalism.

Francis’ pastoral reinterpretation of the “Pastoral Constitution on the Church in the Modern World” demonstrates, Faggioli maintains, how changed the world and the church of today are from those encountered by the council: from a Eurocentric to a global church, from the church as institution to one in mission, from a sociological and cultural Catholicism to an inclusive church, and the shift from the church of the sacristy to service and accompaniment of the poor.

Faggiolo regards the new ecclesial movements, like Focolare and Sant’Egidio, as the future of the church and possibly a way out of the culture wars that afflict U.S. Catholicism.

The ecclesial and political cultures that most concern Faggioli are Europe and the United States, though it is more exact to say the popular church in Italy and the hierarchical church in the United States. He regards the new ecclesial movements, like Focolare and Sant’Egidio, as the future of the church and possibly a way out of the culture wars that afflict U.S. Catholicism. In the diversity of the ecclesial movements that maintain communion with the official church, he sees a pattern that might pacify the culture-warriors in the U.S. church.

Though many of the movements are international in scope, their impact on the local church has been strongest in Italy and some Latin countries (e.g., Spain and Mexico). Their reach north of the Alps has been marginal. Furthermore, Faggioli overlooks the Latin American church, which has made significant contributions to post-Vatican II Catholicism—especially through liberation theology and the plenary meetings of bishops at Medellín, Puebla and Aparecida—and has left its strong imprint on Pope Francis.

Faggioli regards the United States as backward for not being more receptive to the movements. While some bishops have resisted them, and there has been some reason to question the past cult-like practices of some, like the neo-catechumenate, the most important reason the movements have not flourished in the United States as they have in Europe has been the relative strength, despite all its flaws, of the parish system in this country. In many cases parishes have not simply maintained the status quo; they have been vehicles of church renewal.

In addition, Faggioli overlooks the Catholic version of American voluntarism. While many dioceses have defunded and closed their social concerns offices, popular engagement has been maintained by groups like the Catholic Worker, Pax Christi, local Catholic Charities, academic centers on Catholic social thought and the volunteer services that engage both young adults and seniors.

Though Faggioli quotes the late Ted Hesburgh, C.S.C., on voting as “the civic sacrament,” he has disappointingly little to say about the practice of citizenship. For that topic, the body of literature by American Catholics like Cathleen Kaveny, Nicholas Cafardi and Vincent Miller, especially during the 2008 election cycle, provides better guidance. Faggioli’s interest is rather on how changing social contexts have altered the character of Catholic involvement in public life through shifting contexts: liberal democracy, the Cold War, globalization, postmodernity and so on.

Catholicism and Citizenshipis excellent historiography, a synthetic scholarly survey of historians’ findings and theologians’ insights. All readers will find in its voluminous notes other books they would like to read; doctoral students will discover dozens of dissertation topics to explore; and scholars, arguments to pursue. General readers will meet provocative, new perspectives on the history and reality of the church in our time. All in all, a genuinely rich read.

This article also appeared in print, under the headline “Movements of History,” in the September 4, 2017, issue.

Drew Christiansen, S.J., former editor of America, is a distinguished professor of ethics and global human development at Georgetown University.