Confessions of a CIA interrogator 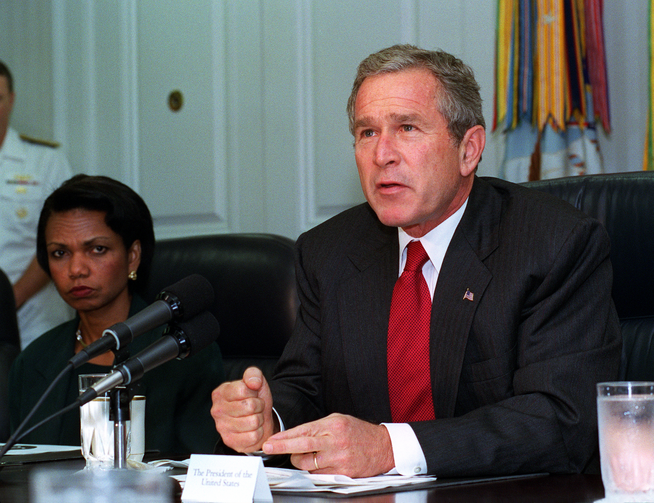 President George W. Bush addresses the media at the Pentagon on Sept. 17, 2001, following a meeting with his national security team and leaders of the National Guard and Reserve forces.

The invasion of Iraq must be the most disastrous U.S. foreign policy venture since the Vietnam War. Debriefing the President: The Interrogation of Saddam Hussein, John Nixon’s informative, personal account as the C.I.A.’s lead interrogator of the captured dictator, provides one more testament to the military and intelligence inadequacies surrounding an operation whose horrific consequences are still being felt—and which is a reminder of what Daniel Berrigan, S.J., once called “the murderous realities of public policy.”

Hussein, led to believe that he was being debriefed rather than interrogated in the weeks after his capture, surprised his questioners with answers that called into question U.S. intelligence competence. Nixon had “studied Saddam closely” while pursuing a master’s degree in national security studies at Georgetown University; and before being sent to the Middle East, he had “spent the previous five years studying Iraq and Iran.” Yet besides using a translator, he often seems taken by surprise at Hussein’s revelations. The C.I.A., Nixon says, was “woefully unprepared...even though it seemed clear by late 2001 that the United States was going to war with Saddam.”

Nixon assures his colleagues of Hussein’s identity from scars and a tattoo. Other issues concerning the invasion of Iraq were not so easily resolved. Nixon acknowledges that he “had believed the WMD [weapons of mass destruction] threat” and makes the equally mind-boggling admission that “we missed the Shia threat to Saddam’s power before 9/11.” Nor did U.S intelligence know that Hussein had “begun to disengage from ruling the country” to work on his novel and had sent a draft to his advisor, Tariq Aziz (Iraq’s deputy prime minister and a Catholic), for criticism shortly before the U.S. invasion.

A loquacious captive facing execution, Hussein held his own and was “a keen judge of his interlocutors,” quite different from Washington’s “caricature” of “the devil incarnate.” A lack of interagency coordination impeded the collection of data. Two years after the sessions with Hussein, Nixon discovered that U.S. military intelligence had “a huge trove of Iraqi documents” that “would have been invaluable” during the interrogation.

The interrogation elicited Hussein’s awareness of the threat of the Wahhabi sect of Islamic fundamentalism. This surprised Nixon, who reflects, “In all the years I had spent analyzing Saddam, I never for a second thought that he was fearful of Wahhabis”—whereas Saddam had actually realized that religious fundamentalism “would spread faster than anyone realized because it excited people who were disillusioned by the failures of Arab political leaders,” and he was concerned that Wahhabi were trying to infiltrate his government. “I wondered where our analysis had come up short,” Nixon muses, realizing that Hussein “was giving clues” and providing answers that were “exactly the sort of thing the White House would not want to hear.”

Hussein, Nixon comes to realize, was dealing with “countervailing pressures that he had to be aware of when governing—that even he had to tread cautiously in dealing with tribal politics in the Sunni heartland.” But Hussein badly misunderstood the United States and mistakenly thought that it would need his secular government to help fight Wahhabist militancy. Hussein also defended Iraq’s invasion of Kuwait in 1990, observing that Kuwait was stealing oil by “slant drilling” into Iraq.

But Hussein badly misunderstood the United States and mistakenly thought that it would need his secular government to help fight Wahhabist militancy.

Denying that he had ordered the use of poison gas against Iranian-supporting Kurds during the Iraq-Iran war, Hussein said that he learned about the incident only after the fact and “became furious.” Nixon writes that Hussein’s anger was not based on the gassing itself but on the likelihood that the Iranians would use it to enable them “to focus international outrage on Baghdad.”

The last third of the book recounts Nixon’s subsequent interactions back in Washington with the C.I.A. and the Bush administration. At the C.I.A.—”plagued with competing fiefdoms”—Nixon is rewarded with a $75 “gift certificate to a local Italian restaurant.” When he briefs Buzzy Krongard, “the third-ranking officer at the CIA and the confidante of [Director] George Tenant...it was clear to me that the 7th floor [of CIA officials] had no clue what we had been up against—or what it took to conduct a successful briefing.” The Iraq invasion had led to the C.I.A. hiring new analysts “by the truckload,” most without “analytic skills,” Nixon writes, and among C.I.A. careerists, “it didn’t matter what you said as long as you made the president happy.”

Things become especially difficult when Nixon is summoned to the Oval Office to brief the president and his “team.” After his initial report provokes a Bush frown, Nixon makes a presentation that preserves the administration’s caricature of Hussein. On another briefing with the vice president, Nixon finds Dick Cheney “an attentive listener, something Bush was not.” The president, Nixon writes, was “intelligent” but suffered from “naivete” and a “black and white view of the world.”

What Iraq Taught Us About Just War
Drew Christiansen

Nixon concludes that all the effects of the invasion are “negative.” On reading Bush’s book, Decision Points, Nixon realizes that its author “had learned nothing about Iraq or Saddam Hussein.” Like Hussein, according to Nixon, Bush lived in a “bubble” that insulated him from “the outside world.” Meanwhile, “the [C.I.A.] slavishly sought to do the president’s bidding...in an effort to get a seat near the center of power and justify its budget.” But the agency’s “sclerotic” bureaucracy meant that it couldn’t adopt technology before it was “obsolete.”

“The CIA needs fixing,” Nixon concludes, but “the answer does not lie in Langley.”

This article also appeared in print, under the headline “Confessions of a CIA interrogator ,” in the May 15, 2017, issue.

Jerome Donnelly, a former professor at the University of Central Florida, originated and co-authored Human Rights: A User’s Guide.