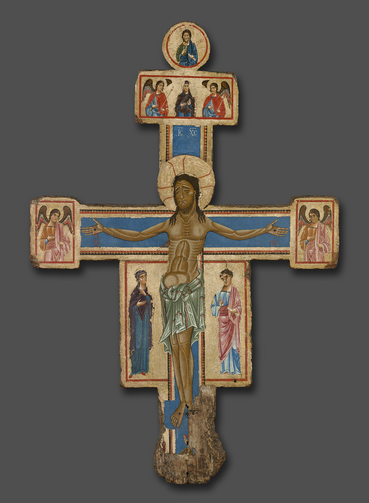 Master of the Bigallo Crucifix. Crucifix, 1230/1240. The Art Institute of Chicago, A. A. Munger Collection.

War and religion, two constants of life during the Middle Ages and early Renaissance, are the subjects of a new permanent exhibit at the Art Institute of Chicago offering visitors a look at more than 700 artifacts, including restored altarpieces, personal devotional items and elaborate clerical vestments and suits of armor.

Anchoring the religious side of the exhibit—the sacred and profane are kept separate—is the Ayala Altarpiece, which was housed in a private chapel in 14th-century Spain. The painted wooden altarpiece, which stands eight feet tall and 24 feet wide, took three years to restore.

Many of the pieces were already part of the museum’s permanent collections, but others were acquired with the idea of cultivating “a renewed interest and understanding of life during Medieval and Renaissance Periods,” Amanda Hicks, head of public affairs at the Art Institute, told America in an email.

“The objects in this exhibition are displayed together to immerse visitors in the spiritual, domestic and chivalric worlds of the Middle Ages and Renaissance,” she said. “The architecture of each gallery was designed to reflect the spaces where the pieces were originally displayed, separating the objects thematically.”

According to a description of the exhibit, the artifacts are curated with the goal of offering a glimpse of “the contexts in which works of art would have been seen and used in their time.”

Among those included in the exhibit are items from Spain and Italy, carved into animal horns, crystal, glass and wood, depicting events from the life of Christ.

“The first rooms are devoted to art for the Catholic Church, where objects worked together with space to make heavenly glory tangible.”

Curiously, the exhibit, called “Saints and Heroes: Art of Medieval and Renaissance Europe,” displays artifacts from churches still very much in use.

For example, a fragment from a tabernacle from Rome’s Santa Maria Maggiore sits behind a glass case, with a touch screen offering visitors an explanation of a tabernacle and blueprints on where the stonework may have been located in the current-day church interior.

Particularly interesting to Catholics will be the descriptions of various religious objects on display.

Take for example the “devotional jewels,” which the exhibit describes as “pious” and “highly personal,” used “to ward off evil, to display devotion to a particular saint or cult, or to signal membership in an order or confraternity.”

Among those included in the exhibit are items from Spain and Italy, carved into animal horns, crystal, glass and wood, depicting events from the life of Christ.

Some Catholics today still use these kinds of items in their devotional lives—think of Saint Christopher medals in cars, rosary beads or crucifixes made of precious metals worn around the neck—though the church, wary of superstition, teaches that such items are simply visual reminders of one’s faith.

Whether believers understood that in earlier times is another question, though the exhibit suggests not.

“They probably survived in part,” the description concludes, “because their owners believed that they had some of the magical properties of a charm or talisman.”