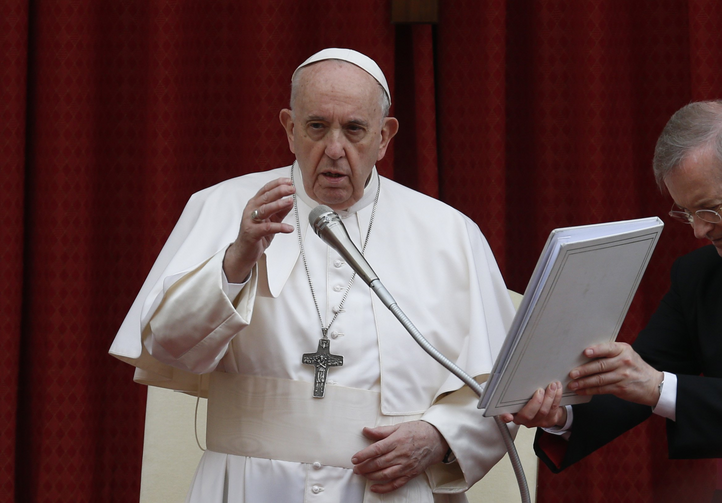 Pope Francis delivers a blessing during his general audience in the San Damaso Courtyard of the Apostolic Palace at the Vatican June 2, 2021. (CNS photo/Paul Haring)

Pope Francis has asked an Italian bishop, Msgr. Egidio Miragoli, 65, to carry out a visitation of the Vatican’s Congregation for the Clergy, which has oversight of the more than 410,000 Catholic priests around the world.

Bishop Miragoli broke the news today, June 7, in a letter to the priests of the Diocese of Mondovi, in Italy’s Piedmont region, where he is pastor. In the letter, obtained by America, he revealed that at the end of the recent plenary assembly of the Italian bishops’ conference, Pope Francis told him he wanted “a favor” and asked the bishop to carry out a visitation of the congregation for clergy “in his name.”

He revealed that on June 3, Francis explained in some detail what he expected him to do when he met the bishop at a private audience in Santa Marta, the Vatican guesthouse where the pope lives. The bishop did not disclose the details of his brief, and the Vatican has not commented on the meeting or a visitation of the congregation.

Pope Francis has asked Bishop Egidio Miragoli to carry out a visitation of the Vatican’s Congregation for the Clergy, which has oversight of the more than 410,000 Catholic priests around the world.

The northern Italian bishop, who has a doctorate in canon law from the Pontifical Gregorian University and whom Pope Francis appointed to the Diocese of Mondovi in September 2017, told his priests that the pope’s request “took me by surprise.” He did not reveal why the pope chose him to do this work.

Bishop Miragoli told his priests he will have to meet each of the persons working at the congregation and will start these face-to-face encounters on Wednesday, June 9. He presumes this work will last “at least for the month of June,” given his other pastoral commitments this month, including confirmations. He asked his priests for their understanding and patience during this period.

Francis was expected to announce the name of the cardinal-prefect’s successor around this time, but the visitation could cause a delay, as happened in the case of the Congregation for Divine Worship and the Discipline of the Sacraments, where Pope Francis also ordered a visitation of that congregation before appointing the new prefect, Archbishop Arthur Roche. On that occasion, however, Archbishop Roche, who was then secretary, had to take charge of the office until the pope’s choice of new prefect was announced because the pope had already accepted the resignation of Cardinal Robert Sarah. At the time of writing, however, the Vatican has not yet announced that the pope has accepted Cardinal Stella’s resignation.

The news comes on the eve of the resignation of the current prefect of the congregation, the Italian cardinal Beniamino Stella, who will turn 80 on Aug. 18.

The Congregation for the Clergy has a staff of 27 clerics (including the prefect) and two lay persons. Its origins date back to 1564, when a congregation was set up to ensure the correct interpretation and implementation of the decrees of the Council of Trent. It was then known as the Congregation of the Council, a title it kept until Dec. 31, 1967, when Pope Paul VI changed its name to the Congregation for the Clergy with the apostolic constitution “Regimini Ecclesiae Universae,” in his reform of the Roman Curia. Its tasks were further consolidated by Pope John Paul II in 1988 with the apostolic constitution “Pastor Bonus.”

According to the latter constitution, the Congregation for the Clergy “examines matters regarding priests and deacons of the secular clergy, with regard to their persons and pastoral ministry, and with regard to resources available to them for the exercise of this ministry; and in all these matters the Congregation offers timely assistance to the bishops” (No. 93). The congregation “is competent concerning the life, conduct, rights, and obligations of clergy”; “advises on a more suitable distribution of priests”; and “fosters the ongoing education of clergy, especially concerning their sanctification and the effective exercise of their pastoral ministry, most of all in the fitting preaching of the Word of God” (No. 95).

As a result of these reforms, the Vatican Yearbook for 2021 states that the Congregation for the Clergy today has four main offices: the office for clergy, the office of seminaries, the administrative office, and the office for dispensations. It remains to be seen what further changes may be made when Pope Francis approves his apostolic constitution for the reform of the Roman Curia, which is expected to be published at the end of summer, though no date has yet been given for this.